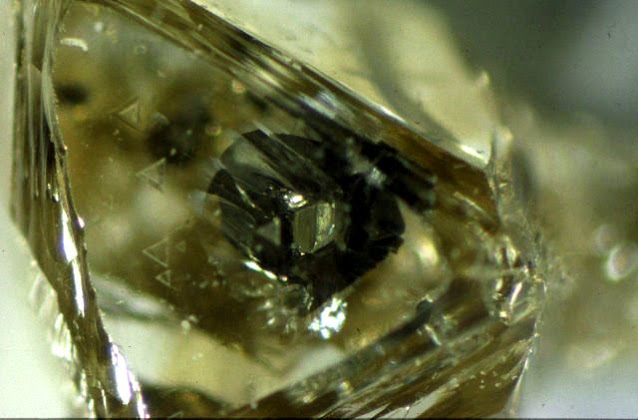 Sulfide inclusion-bearing rough diamonds from the Jwaneng Mine, Botswana. This optical photomicrograph of a rough diamond shows the natural diamond growth surface. Below the surface, at the center, is a brass-colored hexagonal shaped grain of iron sulfide surrounded by an irregular black rim. This rim is caused by internal fracture of the diamond on its ascent to the earth's surface via explosive volcanism. Sulfide grains such as these are removed for sulfur isotopic analysis.

Diamonds from Canada formed in ocean water that made it to the mantle.

Diamonds may be valued by the jewelry industry for their exquisite sparkle. But a recent scientific discovery has revealed that diamonds can be of value for the information they hold in addition to their beauty.

Natural diamonds are formed roughly 90 miles below the Earth’s surface. There are only limited zones in the Earth’s mantle that can produce diamonds due to the high temperatures and pressures required for their formation. Scientists have recently determined that some rapidly formed diamonds provide a snapshot of this extreme environment in which they formed.

The picture of these conditions comes from fluids trapped during formation, which provides information about the material that infiltrates the Earth’s mantle. These materials are thought to be the cause of abrupt changes in chemical and physical properties that are found at the border of the continental upper mantle and crust.


Once they’re trapped in a diamond, these fluid inclusions are shielded from later alteration, so we can analyze them for hints about the conditions in the Earth’s crust and upper mantle.

The elemental composition of the ocean water (particularly the Sr isotopic compositions) and the timing of the diamond formation provide some indication of the region’s history. The authors suggest that the merging of two tectonic plates formed a deep cavity under western North America that filled with ocean water during the Mesozoic Era, which spanned roughly 252 million to 99 million years ago.

Once the ocean water filled the cavity in the Earth’s mantle, it reacted with the surrounding rocks, diluting the oceanic signatures. These reactions led to the formation of high-Magnesium carbonatitic and silicic melts. As the ocean water traversed mixed peridotite-eclogite regions of the Earth’s outermost shell, interactions with the rock and melting caused other compositional transitions.

This dynamic environment also fueled the growth of diamonds. These diamonds formed rapidly due to the oxidation gradient between the evolving fluids and the local shell of the earth (the lithosphere). And, conveniently for us, that rapid growth helped trap some of the water and bring it to the surface.

The analysis of the fluid found in these diamonds provides us with information regarding the site of their origin. This information can be used both to understand historical changes in the Earth and to identify new regions of potential diamond deposits based on similar geological conditions.