Top Spots For Gem Hunting In The US I 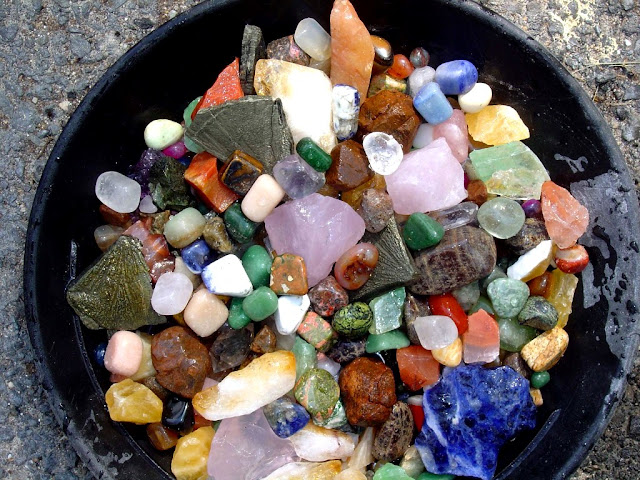 Similar to the therapeutic relaxation of tossing a fishing line or hand-pressing fresh dough, a methodic hunt of natural resources—that is, finding gems—is worth a vacation, too. Consider taking a vacation to one of these geologically rich destinations and you might just find enough gemstones or precious metals to pay for the trip, because you can keep everything you find. You're guaranteed to have a good time looking—even if you come up empty.

Famously popular, Hiddenite Gem Mines is known for the discovery of some of the largest gems in the world. Comprised of several mines, Hiddenite Gem Mine’s group includes Emerald Hollow Mine—which is open for public mining—Adams Mine and NAEM (North American Emerald Mine). At this Great Smoky Mountain-area mine in Franklin, North Carolina, about 60 miles southwest of Blowing Rock, you might find rubies, sapphires, garnets, and rutile. Your admission fee gets you two buckets, a screen box, and a seat cushion, which you use at the flume line. For a dollar extra, you can get a shade umbrella. Admission: $15 for ages 12 and up, $10 for kids 6 to 11; free for ages 5 and under.
Address: 484 Emerald Hollow Mine Dr, Hiddenite, NC 28636

The Crater of Diamonds volcanic pipe is part of a 95-million-year-old eroded volcano. The deeply sourced lamproite magma, from the upper mantle, brought the diamonds to the surface. The diamonds had crystallized in the cratonic root of the continent long before and were sampled by the magma as it rose to the surface. For a fee of a few dollars you can enter the mine, search all day and keep any diamonds that you find. In addition to diamonds, you might find one of the many colorful gemstones that occur naturally there. These include: amethyst, agate, jasper, garnet, peridot, hematite and many others. Crater of Diamonds State Park is a 911-acre (369 ha) Arkansas state park in Pike County, Arkansas, in the United States. In addition to diamonds, visitors may find semi-precious gems such as amethyst, agate, and jasper or approximately 40 other minerals such as garnet, phlogopite, quartz, baryte, and calcite.
Address: 209 State Park Rd, Murfreesboro, AR 71958

The Morefield Gem Mine is a unique experience for children and adults alike. The mine is a great introduction to minerals and mineral collecting at a real mine. The mine is a great introduction for anyone, any age, who wants to find rocks, minerals, and gems and learn to identify them.  No less that 10 minerals species can be found on any day and with experience, time, and depending on what is being mined underground, more of the almost 80 mineral species occurring in the Morefield pegmatite can be found.
Address: 13400 Butlers Rd, Amelia Court House, VA 23002

New York is home to Broadway shows, plenty of shopping, Times Square, and the Statue of Liberty, but did you know New York is a great place to mine for gemstones? Crystal Grove Diamond Mine is the place to go to find Herkimer diamonds, beautiful quartz crystals that are fun to mine. These crystals were first discovered in New York, and the perfect clarity of some of these stones makes them very popular with gem hunters.
Address: 161 Co Rd 114, St Johnsville, NY 13452

Since 1981, the Royal Peacock Opal Mine has been open to the public as a pay-to-dig mine. It has yielded countless world-class precious opal specimens during that time. Digging isn't cheap, though. They charge $180 per person per day to dig in the fire-opal-rich bank area and $75 to dig in the mine dumps and tailings (piles of rock extracted from the mine).
Address: 10 Virgin Valley Rd, Denio, NV 89404

The Himalaya Tourmaline Mine is located near Santa Ysabel, CA at Lake Henshaw in the beautiful Mesa Grande.   Visitors can dig at Lake Henshaw Resort where they will dig and screen through ore from the world famous Himalaya Mine. Many minerals can be found including pink and green tourmaline, black tourmaline, quartz crystals, spessertine garnet, lepidolite, clevelandite, and a variety of others.
Adult Dig $75, youth 13 years old to 15 years old half price ($37.50), children 12 years old and under are free with paying adult.
Address: 26142 CA-76, Santa Ysabel, CA 92070

It started as a commercial gold mine and opened to the public in 1984. At Gold n Gem Grubbin you can pan for gold and screen for gemstones in a convenient sluices sitting comfortably under shade trees with a view of our 7 acre lake. The mine's trained staff will teach you the art of gold panning just like the old timers did it!
What you may Find Gold, Gemstones (Rubies, Emeralds, Sapphires, Amethyst, Garnets). There is no admission fee, we have free parking and handicap facilities.
Address: 75 Gold Nugget Ln, Cleveland, GA 30528

Ron Coleman Mining has been the premiere destination for hands-on mining and precious gem gifts for nearly 30 years. Families and visitors come from all over the country to see our mine in Jessieville, Arkansas, and to dig their own gems. This mine was and is the most productive quartz mine in Arkansas. It has been producing quartz crystals in large quantities since 1943.
Address: 211 Crystal Ridge Ln, Jessieville, AR 71949