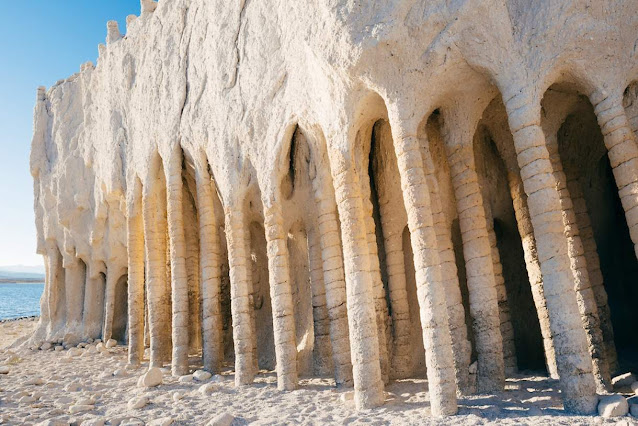 These amazing formations in the shape of helical columns were found on the shores of Crowley Lake, California, USA. The stone columns up to 20 feet tall connected by high arches, as if part of an ancient Moorish temple.

They had been buried and hidden for eons until the reservoir's pounding waves began carving out the softer material at the base of cliffs of pumice and ash.

In the ensuing decades, the columns were regarded as little more than curiosities along the eastern shore of the Los Angeles Department of Water and Power reservoir, which is best known as a trout fishing hot spot about 10 miles south of Mammoth Lakes.

But now answers are emerging from a study at UC Berkeley. Researchers have determined that the columns were created by cold water percolating down into — and steam rising up out of — hot volcanic ash spewed by a cataclysmic explosion 760,000 years ago

"These columns are spectacular products of a natural experiment in the physics of hydrothermal convection," Noah Randolph-Flagg, 25, a PhD candidate and lead author of the study, said in an interview.

The blast, 2,000 times larger than the 1980 eruption of Mt. St. Helens, created the Long Valley Caldera, a massive 10-by-2-mile sink that includes the Mammoth Lakes area. It also covered much of the eastern Sierra Nevada range with a coarse volcanic tuff, or ash fall.

Randolph-Flagg said researchers not only discovered the origin of the columns but also learned a great deal about the surrounding landscape. "They have lot to tell us about what the region was like before and after the caldera exploded, and about how volcanoes can change local climate," he said.

The columns began forming as snowmelt seeped into the still hot tuff. The water boiled, creating "evenly spaced convection cells similar to heat pipes," according to the study to be presented next month in San Francisco at an American Geophysical Union meeting, the world's largest conference in geophysical sciences.

Analyses by X-rays and electronic microscopes of samples of the columns found that tiny spaces in these convection pipes were cemented into place by erosion-resistant minerals. 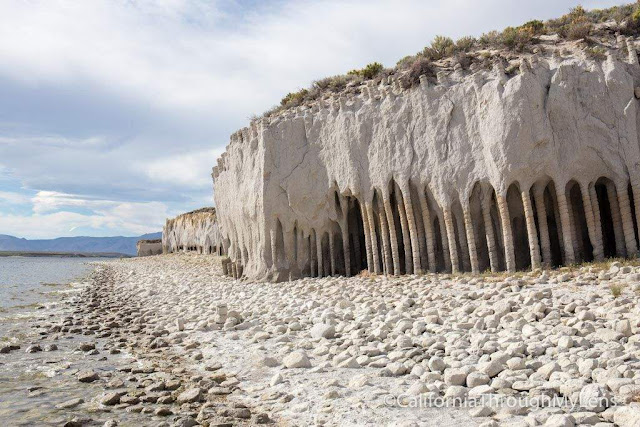 Randolph-Flagg estimates that as many as 5,000 columns exist within a 2- to 3-square-mile area east of the lake. They appear in clusters, and are diverse in size and shape.

Many are gray, straight as telephone poles and encircled with horizontal cracks about 12 inches apart. Some are reddish-orange in color. Some are bent, or all tilting at the same angle. Still others are half-buried and resemble the fossilized backbones of dinosaurs.

Next year, the Department of Water and Power will begin ferrying students to the site as part of an "effort to further educate the public about these invaluable natural resources," said Amanda Parsons, a spokeswoman for the utility.

Edward W. Hildreth, a research geologist with the U.S. Geological Survey and expert on the history of the Long Valley Caldera and the chemistry of its tuff, welcomes the sudden interest in the columns, which can be reached by boat, on foot or by four-wheel-drive vehicles.

More analysis could help scientists better understand how quickly the columns solidified, and the chemistry and temperatures that produced their spacing, width, height and composition.

Among other researchers investigating the columns is Robin Wham, 62, a graduate student in geology at Cal State Sacramento whose proposed thesis involves mapping their precise locations and comparing their characteristics to those of similar formations in New Mexico and Mexico.

On a recent Sunday, Wham, a retired physical therapist, clambered down a steep trail with a clipboard and GPS device to double-check the coordinates of a grotto filled with columns that she likes to call "my office."

"From the very first moment I laid eyes on this weird and wondrous place a year ago, I was smitten," she said. "It made me go back to school to get a master's degree in geology." 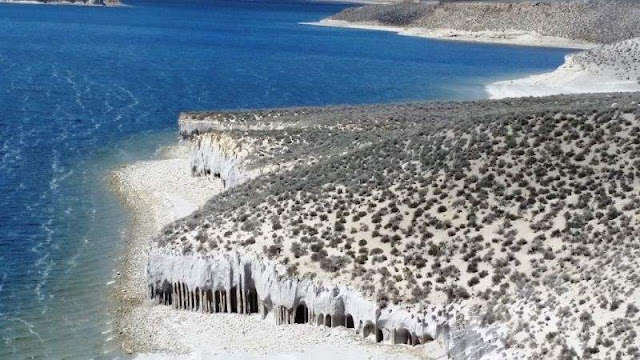