How Did Those Petrified Logs Get 'Cut'? 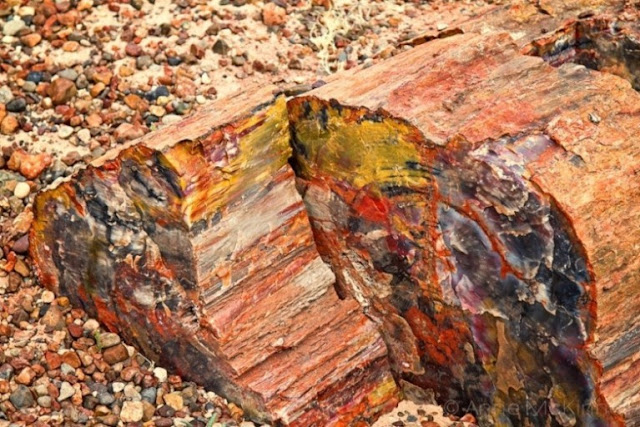 Why do the petrified logs look like someone cut them with a saw?

Petrified wood is mostly silica—quartz. The logs are very hard (7.8 on the 1-10 Mohs hardness scale!), but brittle. After petrification, but while the logs were still encased in matrix rock, the logs cracked under stress. As the logs eroded out, from gravity and ice wedging, the cracks widened and segments separated. Silica naturally breaks on a clean angle.

To answer Mr. Klages' question, we turned to Bill Parker, the park paleontologist we featured in the issue. "The fossilization process itself is fairly complex," he says, but it goes something like this:

A tree dies, falls over and is buried in a river channel or floodplain, under layers of mud, sand and gravel. In the groundwater table, the tree becomes saturated like a sponge and expands. The water, sand and gravel cut off exposure to oxygen, so the tree doesn't rot. Volcanic ash in the water breaks down, and the silica that was in the ash goes into solution — forming silicic acid, which enters the waterlogged tree and interacts chemically with the wood, altering it to silica and replicating the features of the wood. Over time, you end up with a silica replica of the tree.

Eventually, the log leaves the groundwater table and goes through a process of "dewatering" and recrystallizing, this time as solid quartz. "Thus, all of the Triassic logs at Petrified Forest now consist almost entirely of quartz," Parker says. This process takes much longer — tens of millions of years, according to the fossil record.

But why do so many of the logs appear "cut"? It has to do with how they got to their present location, Parker says: "About 60 million years ago, forces of geology started the uplift of the Colorado Plateau. This area went from deeply buried to being uncovered and raised more than 1 mile above sea level. As a high point, it is continuously eroding away, exposing old rocks and their fossils, such as the petrified logs from the Triassic."

So the movement and erosion of the land is what caused the logs to break. And the inner surfaces where they've broken are flat because quartz doesn't break neatly across its crystal faces, so instead it snaps across the log's shortest area across — sort of like when you snap a piece of chalk, Parker says.

"These logs are pure quartz, and to cut them would require a diamond saw," he adds. "Rock shops use these saws to cut log portions and polish them for sale," but here at Petrified Forest, this has happened naturally over very long periods of time."


Why do the petrified logs look like someone cut them with a saw?

Where to Find Gold in the United States