How Is Aura Rainbow Quartz Made?

Aura quartz is quartz that has been enhanced with a combination of titanium and niobium.

Metal-coated crystals are natural crystals, such as quartz, whose surface has been coated with metal to give them an iridescent metallic sheen. Crystals treated this way are used as gemstones and for other decorative purposes. Possible coatings include gold (resulting in a stone called aqua aura), indium, titanium, niobium and copper. Other names for crystals treated so include; angel aura, flame aura, opal aura or rainbow quartz.

Aqua aura is created in a vacuum chamber from quartz crystals and gold vapour by vapour deposition. The quartz is heated to 871 °C (1600 °F) in a vacuum, and then gold vapor is added to the chamber.

The gold atoms fuse to the crystal's surface, which gives the crystal an iridescent metallic sheen. When viewed under a gemological microscope in diffused direct transmitted light, aqua aura displays the following properties:

Rainbow quartz have been treated with a combination of titanium and gold. Titanium molecules are bonded to the quartz by the natural electrostatic charge of the crystal in a process known as magnetron ionization.

The brilliant color of flame aura is the result of optical interference effects produced by layers of titanium. Since only electricity is used to deposit the titanium layers and create these colors, very little heat is involved and the integrity of the crystal is maintained. The crystal does not become brittle or prone to breakage as with other treatments. 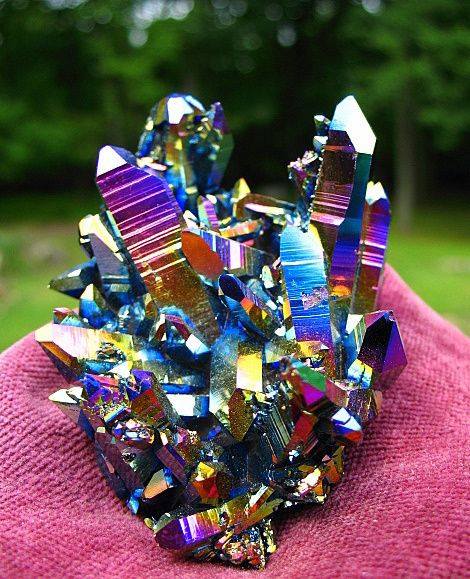 Read also:
Extremely Wonderful New Find of Skeletal Halites in Poland
Where does Watermelon tourmaline come from? How Does It Grow?
How Do Opalised Fossils Form?
Share to: