What Is Petoskey Stone, and Where Can You Find It? 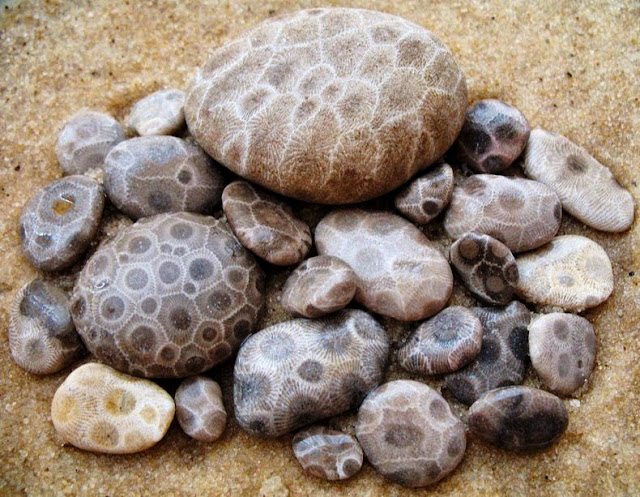 Petoskey stone is a rock and a fossil, often pebble-shaped, that is composed of a fossilized rugose coral, Hexagonaria percarinata.

Why is it called the Petoskey Stone?

The name Petoskey Stone likely came about because it was found and sold as a souvenir from the Petoskey area. The name Petoskey appears to have originated late in the 18th century. Its roots stem from an Ottawa Indian legend.  In 1965, Petoskey stone was named the state stone of Michigan.

How was the Petoskey stone formed?

So, what is a Petoskey stone? It is a fossil colonial coral that lived in the warm Michigan seas during the Devonian time around 350 million years ago. The name Hexagonaria (meaning six sides) percarinata was designated by Dr. Edwin Stumm in 1969 because of his extensive knowledge of fossils. This type of fossil is found only in the rock strata called the Gravel Point Formation. This formation is part of the Traverse Group of the Devonian Age.


The stones were formed as a result of glaciation, in which sheets of ice plucked stones from the bedrock, grinding off their rough edges and depositing them in the northwestern (and some in the northeastern) portion of Michigan's lower peninsula. In those same areas of Michigan, complete fossilized coral colony heads can be found in the source rocks for the Petoskey stones.

During the Devonian time, Michigan was quite different. Geographically, what is now Michigan was near the equator. A warm shallow sea covered the State. This warm, sunny sea was an ideal habitat for marine life. A Devonian reef had sheltered clams, cephalopods, corals, crinoids, trilobites, fish, and many other life forms.

The soft living tissue of the coral was called a polyp. At the center of this was the area where food was taken in, or the mouth. This dark spot, or eye, has been filled with mud of silt that petrified after falling into the openings. Surrounding the openings were tentacles that were used for gathering food and drawing it into the mouth. The living coral that turned into the Petoskey stone thrived on plankton that lived in the warm sea.

Calcite, silica and other minerals have replaced the first elements of each cell. Each separate chamber, then, on each Petoskey stone, was a member of a thriving colony of living corals. For that reason the Petoskey stone is called a colony coral.

Where can you find the Petoskey stone?

Petoskey stones can be found on various beaches and inland locations in Michigan, with many of the most popular being those surrounding Petoskey and Charlevoix. The movement of the frozen lake ice acting on the shore during the winters is thought to turn over stones at the shore of Lake Michigan, exposing new Petoskey stones at the water's edge each spring.Petoskey Stones are also commonly found in Iowa, Indiana, Illinois, Ohio, New York, Canada, Germany, England, and even Asia.

Pleistocene glaciers (about two million years ago) plucked Petoskey stones from the bedrock and spread them over Michigan and surrounding areas. This is why Petoskey stones can be found in gravel pits and along beaches far from the Petoskey area.

The best time to find the Petoskey stones is early spring after the ice on Grand Traverse Bay has melted along the shore. Each year as the ice is broken up and the winds push the ice in different directions, it pushes a new crop of Petoskey stones towards the shores.

How to Polish Petoskey Stones by Hand

Petoskey stones are made up of calcite, and therefore are a good candidate for hand polishing. Calcite is soft enough so that it can be easily worked, but dense enough to take a nice polish.

What You Need to Polish the Stones:
Once you have found the stone you want to polish, sand it down with the 220 the sandpaper mentioned above. After rubbing, rinse the stone down and dry it off. Examine the stone for scratch marks, and if there are any, keep on sanding! All scratch marks should be gone!  Next, sand again with 400 grit sandpaper. This should remove any coarse spots.

Once again, rinse, dry and check.  Now sand the paper with the 600 grit to make sure that the stone is smooth and scratch free. When you think it looks perfect, continue sanding for another 10 minutes, just to make sure.  At this point, it is time to polish. Sprinkle the damp corduroy or velvet with polishing powder. A short, rotating rubbing will polish the stone. However, if scratches appear, start from the beginning with the 220 grit paper to remove them!  When you’re finished with the polishing, simply rinse the stone off in clean water, and dry. Now you have your own, hand polished Petoskey stone!

Read also: What is Sea Glass, and Where Can You Find It? 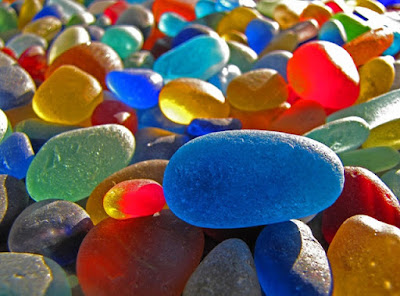