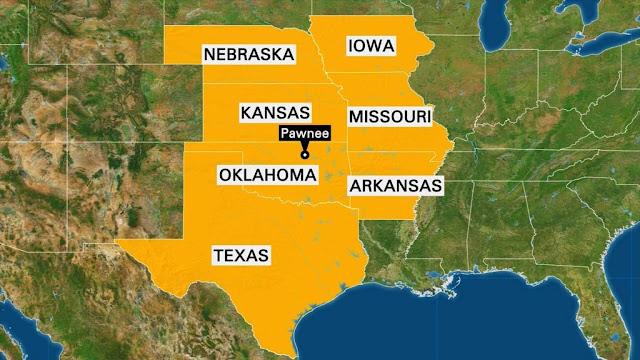 On September 3, 2016, a magnitude 5.8 earthquake struck just northwest of Pawnee, Oklahoma, causing moderate to severe damages in buildings near the epicenter. It was the largest ever recorded in the state.

The Pawnee earthquake followed the dramatic increase of seismic events in the central United States beginning in 2009, associated with the increase of underground wastewater disposal by oil and gas operators. This and other events in the area raised public concerns and led governmental agencies to shut down injection wells and establish new regulations regarding wastewater injections.

While human-caused earthquakes have been documented for more than a century, their increasing number reported worldwide has drawn much scientific, social and political attention. Such earthquakes are related to industrial activities such as mining, construction of water dams, injection of liquids such as waste water and carbon dioxide, and extractions associated with oil and gas exploitation.

With the ever-increasing demand for energy and mineral supplies worldwide, the number of human-caused earthquakes is expected to rise in the upcoming years. Some of the largest and more destructive earthquakes of the past few years have been related to man-made activities, such as the 2008 magnitude 7.9 Wenchuan (China) earthquakeand the 2015 magnitude 7.8 Nepal earthquake.

In most of the cases industrial activities do not induce earthquakes. But this becomes problematic when such activities are close to active faults. In this case, even small stresses underground caused by man-made activities can destabilise faults, inducing earthquakes.
Faulty fluid injections

Such stresses, such as fluid injections, are even capable of migrating long distances in the planetary crust, can induce earthquakes days, months or even years after the injection.

The above figure shows that as fluid pressure at the top of the well Basel 1 (purple line) was increasing during injection, the induced seismicity rate also increased (bluish bars). In the bottom figure, the average squared distance of the induced earthquakes from the well is shown, which indicates the complex propagation of seismicity away from the well over time. The largest-earthquakes (magnitude greater than 3, shown with stars) occurred after the injection ended.

Such problems, along with the general lack of knowledge of the exact stress and faulting conditions below ground, make such earthquakes difficult to forecast or manage.

In Europe, where the population density is higher than the United States, public concern over man-made earthquakes is greater. In the well-known case of Basel, Switzerland, which took place in 2006, approximately 11,500 cubic metres of water were injected at high pressure into a 5-km deep well to make the extraction of geothermal energy possible. During the injection phase, more than 10,000 earthquakes were induced, including some strong events that were felt in Basel itself. These raised public concern and anger, leading to the termination of the project and to more than $9 million on damage claims.

In Southern Europe, which has a higher risk of natural occurring earthquakes, public tolerance on induced earthquakes due to industrial activities is even more limited. The deadly 2012 Emilia (Italy) earthquake sequence became a topic of sustained public debate and political discussion, based on the proximity of the earthquake epicentres to an oil field.

The Italian government established an international committee to investigate, and while no clear link between regional seismicity and oil-extraction was found, one wasn’t excluded either. Other studies concluded that the earthquakes were a natural event.

Another recent case is that of the Castor project, an underground offshore gas-storage facility in the Gulf of Valencia, Spain. The US$2 billion project was terminated by the Spanish government in 2014 following a burst of regional seismicity immediately after the initiation of gas-injection operations, and the public concern that followed.


The above European Seismic Hazard Map displays the most seismically hazardous areas in Europe measured by the peak ground acceleration(PGA) that may be expected during an earthquake, with a 10% probability to be reached or exceeded in 50 years. Green indicates comparatively low hazard values of PGA below 0.1g; yellow to orange show a moderate hazard, between 0.1-to-0.25g; and red identify high-hazard areas with PGA of more than 0.25.

The previous cases illustrate some of the coming challenges to be faced with man-made earthquakes. The ability to distinguish between natural and human-induced earthquakes can be difficult or even impossible, especially in seismically active regions, while in other cases the risk associated with industrial activities is significantly underestimated. Such problems pose novel challenges for risk mitigation and economic growth, especially in seismically active regions such as Southern Europe.

The image above illustrates the drilling and extraction operations may take place near or within seismically active regions, increasing the risk of activating faults and/or accelerating the occurrence of earthquakes that would otherwise would occur naturally sometime in the future.

To significantly reduce such hazards, regulations are required that include hazard modelling as well as assessment before and during industrial activity that might perturb regional stress fields. Such regulations were recently issued in North America, including California, Oklahoma, Ohio and Texas, as well as in and Canada. In Europe, the EU has not yet issued any such regulations, but guidelines have been put forth in some countries that have experienced induced earthquakes, including the Netherlands, Switzerland, the UK, Germany, France and Italy.

In addition, communication campaigns that will inform the public on the economic benefits and the risks that such industrial operations may have, should also put forth. Such measures will assure the effective mitigation of the associated risk and the sustainability of the industrial project.


This article was originally published on The Conversation.
Share to: