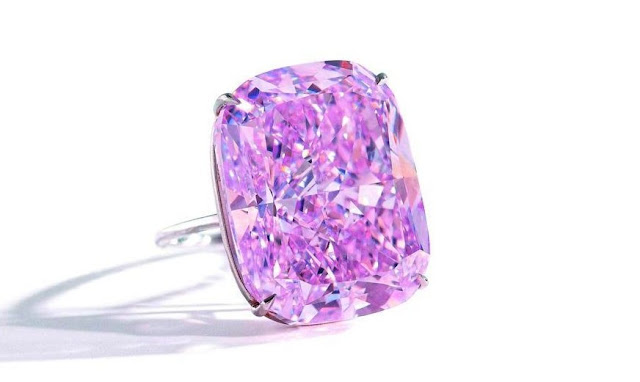 The 37.3-carat cushion-shaped stone, known as the “Raj Pink” and mounted on a ring, was billed as the star lot at Sotheby’s semi-annual jewelry sale in the Swiss city.

“It was not sold,” David Bennett, worldwide chairman of Sotheby’s international jewelry division who conducted the auction, told the crowded sale room.

The “Raj Pink” was named by its current owner, who wished to remain anonymous, Sotheby’s said. The name is based on the Sanskrit word for king.

Pink diamonds are extremely rare, making up less than 0.02% of the diamonds submitted to the Gemological Institute of America (GIA) each year, according to the auction house.

"Fancy intense" designates pink diamonds that are quite strong in color. According to the GIA, "fancy vivid" and "fancy deep" diamonds -- which are stronger in color than fancy intense diamonds -- command the highest prices.

The Graff Pink diamond holds the current record for a fancy intense pink diamond sold at auction. Once owned by American jeweler Harry Winston, the 24.78-carat stone sold for $46.1 million at a Sotheby's Geneva sale in 2010.

The record for the most expensive jewel sold at auction is currently held by another pink diamond, aptly named the Pink Star. The 59.60-carat, fancy vivid pink sold for $71.2 million in April.

Other highlights from the Magnificent Jewels and Noble Jewels sale include two fancy intense yellow diamonds weighing 82.47 and 102.54 carats, and a fancy vivid blue diamond ring.
Share to: