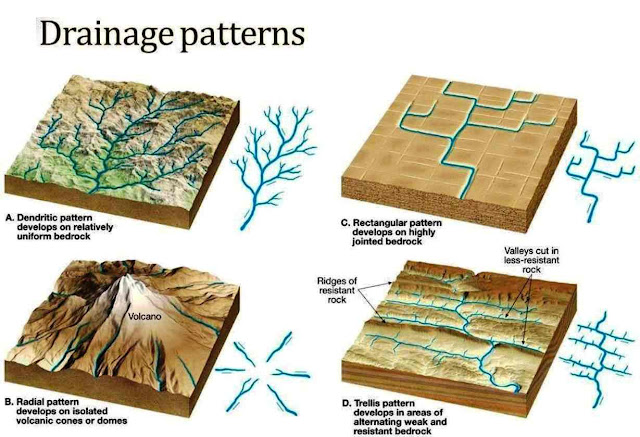 Drainage pattern a pattern created by stream erosion over time that reveals characteristics of the kind of rocks and geologic structures in a landscape region drained by streams.

Drainage pattern is the pattern formed by the streams, rivers, and lakes in a particular drainage basin. They are governed by the topography of the land, whether a particular region is dominated by hard or soft rocks, and the gradient of the land.

Geomorphologists and hydrologists often view streams as being part of drainage basins. A drainage basin is the topographic region from which a stream receives runoff, throughflow, and groundwater flow. Drainage basins are divided from each other by topographic barriers called a watershed.

A watershed represents all of the stream tributaries that flow to some location along the stream channel. The number, size, and shape of the drainage basins found in an area varies and the larger the topographic map, the more information on the drainage basin is available.


The pattern of tributaries within a drainage basin depends largely on the type of rock beneath, and on structures within that rock (folds, fractures, faults, etc.).

The main types of drainage patterns:

Dendritic patterns, which are by far the most common, develop in areas where the rock (or unconsolidated material) beneath the stream has no particular fabric or structure and can be eroded equally easily in all directions. Examples would be granite, gneiss, volcanic rock, and sedimentary rock that has not been folded. Most areas of British Columbia have dendritic patterns, as do most areas of the prairies and the Canadian Shield.

Trellis drainage patterns typically develop where sedimentary rocks have been folded or tilted and then eroded to varying degrees depending on their strength. The Rocky Mountains of B.C. and Alberta are a good example of this, and many of the drainage systems within the Rockies have trellis patterns.

Rectangular patterns develop in areas that have very little topography and a system of bedding planes, fractures, or faults that form a rectangular network. Rectangular drainage patterns are rare in Canada.

Parallel drainage system is a pattern of rivers caused by steep slopes with some relief. Because of the steep slopes, the streams are swift and straight, with very few tributaries, and all flow in the same direction. Parallel drainage patterns form where there is a pronounced slope to the surface. A parallel pattern also develops in regions of parallel, elongate landforms like outcropping resistant rock bands.

Radial drainage system, the streams radiate outwards from a central high point. Volcanoes usually display excellent radial drainage. Other geological features on which radial drainage commonly develops are domes and laccoliths. On these features the drainage may exhibit a combination of radial patterns.

A deranged drainage system is a drainage system in drainage basins where there is no coherent pattern to the rivers and lakes. It happens in areas where there has been much geological disruption. The classic example is the Canadian Shield. During the last ice age, the topsoil was scraped off, leaving mostly bare rock.


The main types of drainage patterns: