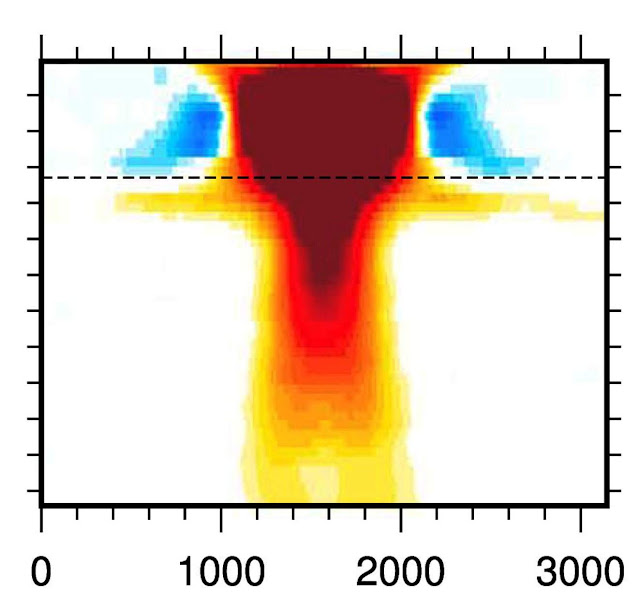 Hawaii's volcanoes stand as silent sentinels. They guard the secret of how they formed, thousands of miles away from where the edges of tectonic plates clash and generate magma for most volcanoes.

A 2017 Nature study by Jones et al. found the best clues yet of the origin of Hawaii's volcanoes through simulation of a shift in the Pacific plate three million years ago. What remains elusive is conclusive evidence that mantle plumes exist.

The plumes are hypothesized, mushroom-shaped upwellings of hot rock from the deep Earth. They are hypothesized to form within the thermal boundary layer at the base of the mantle and are thought to carry heat from the Earth's core that generates a volcano's magma. Scientists have now made the best computational modeling yet of mantle plumes, according to a study made available online in January of 2018 ahead of its peer-review and publication November of 2017 in the American Geophysical Union's Journal of Geophysical Research, Solid Earth.

The international science team showed through supercomputer simulations, for the first time, details of how plumes decelerate seismic waves and how plumes appear in seismic tomographic images of the Earth's mantle, the layer beneath the crust. What's more, the researchers say their work could help guide future experiments on the ocean floor with deep Earth imaging and help get to the bottom of mysteries like the origin of Hawaii's volcanoes.

"We found that mantle plumes are likely to be more challenging to seismically image than we previously recognized," said study lead author Ross Maguire, formerly a PhD student who has recently graduated from the department of Earth and Environmental Sciences at the University of Michigan. "Our current picture of deep mantle plumes might be lacking," Maguire said, pointing to a lack of seismic data coverage.

Seismic imaging can see rock structures thousands of kilometers below ground by listening to the echos of earthquakes. Networks of seismic stations sit on the ocean floor and measure differences in the travel time of seismic waves through rock, in essence taking a CT scan of the deep Earth.

"In order to constrain the role of mantle plumes in Earth dynamics as well as to understand the causes of hot spot volcanism, we need to focus on increasing the global coverage of seismic sensors, particularly in the oceans, which currently only have sparse coverage," Maguire said. Oceanic deployments of seismic sensors are costly and tough to plan and execute, he added.

"In our study, we used computer modeling to find optimal imaging scenarios, so that we can recover the most detail of mantle plumes at the lowest cost," Maguire said. "We hope that our results will help guide the design of future seismic deployments aimed at imaging the mantle beneath hotspots."

"The thing that is probably new in this work is that we combine, maybe for the first time, actual numerical models of how plumes form and how they rise in the Earth with estimates of their seismic structure " said study co-author Jeroen Ritsema, a professor in the Department of Earth and Environmental Sciences at the University of Michigan.

"Secondly," he added, "we've also explored how various network configurations might change the way that we are imaging plumes. We've done extensive tests to figure out the optimal configurations of seismometers on Earth to see plumes. This is particularly important for Hawaii," Ritsema said. "Hawaii is a place where we believe there is a plume responsible for volcanism on the Hawaiian islands. We've determined what might be optimal offshore deployments on the seafloor that could lead to best images of the deep mantle beneath Hawaii."

"It is a big computational challenge to simulate wave propagation through mantle plumes," Maguire said. They needed numerical codes that solve the elastic wave equation in Earth's mantle at high frequencies and in three dimensions. "What that does is it allows us to accurately account for the effects of wave propagation phenomena such as wave diffraction around plume tails, which is very important for imaging plumes," Maguire said.

XSEDE, the eXtreme Science and Engineering Discovery Environment, funded by the National Science Foundation, provided computational resources to the science team through access to supercomputers and experts in how to use them best. "We would not be able to do this type of work without supercomputing resources like those that are provided by XSEDE," Maguire said. "They allowed us to run our wave propagation simulations on hundreds or sometimes thousands of computer cores in parallel."

The science team tackled the challenges imposed by their modeling requirements and used a seismology software package called SPECFEM 3D (GLOBE), which is a spectral element code developed by Jeroen Tromp of Princeton and his team that simulates wave propagation in the Earth's interior. They used the Stampede1 supercomputer of the Texas Advanced Computing Center through an XSEDE allocation that ran over 1.2 million core hours on Stampede1 and continues with the Stampede2 system. "We ran that code mostly on Stampede1, and it was actually quite easy to get the code configured on Stampede1, since all the modules and tools we needed to compile it were immediately available," Maguire said.

The workflow management proved daunting, with many simulations that produced hundreds of gigabytes of data. "The XSEDE team was really helpful in answering all my questions about how I can optimize my workflow, for example how I can spend the least amount of time waiting in the queue for my jobs to run; or how I can efficiently transfer large amounts of from Stampede onto my local machine," Maguire said.

The researchers also took advantage of the XSEDE Campus Champions program, campus information technology faculty and staff that are trained by and maintain close ties to XSEDE. "XSEDE Campus Champion Brock Palen of the University of Michigan helped us answer questions about what type of resources are available through XSEDE, and how we can get access to them," Maguire said.

Another useful resource, said Maguire, was access to an allocation on XSEDE Science Gateways through the Computational Infrastructure for Geodynamics with the help of Lorraine Wang. "Science Gateways enabled us to test our code and really figure out how computationally demanding our project would be," Maguire said.

The researchers used a computationally demanding technique called synthetic tomography, which Maguire explained was essentially a reliability test of how well scientists can trust the accuracy of images of the Earth's interior. "What we do is we simulate seismic wave propagation through a digital Earth model, which in our case contains a mantle plume," Maguire said. They do that with virtual seismograms, which are processed like actual seismic data to get an image of recovered plume structure. "It really allows us to test how a mantle plume would be imaged tomographically and how its features would either be blurred or distorted, depending on the imaging configuration," Maguire said.

"Our study focuses primarily on lower mantle plume tails because it's really one of the only ways forward in terms of settling the debate on the existence of mantle plumes," Maguire said. This relates to hotspot volcanism, caused by an anomalously hot mantle away from plate boundaries. Mantle plumes that rise from the core boundary interest geoscientists because they play a role in Earth's total heat budget by moving heat from the core to the surface.

"Whole mantle plumes, meaning plumes that rise from the core-mantle boundary, are also the most challenging to image seismically because our resolution is very poor in the deep mantle and deep plume conduits are likely to be thin," Maguire said.

Supercomputers might finally be starting to catch up with long-standing scientific questions and help provoke new questions. "I think that the challenge remains in understanding exactly what we are looking for," said Ritsema. "In Maguire's work, we have defined a mantle plume as a purely thermal upwelling in the deep Earth. In this particular case, the plume is a fairly narrow structure -- it has a fairly narrow tail, with its complications in imaging. But there has been other work by other groups who have in fact argued that plumes might be much thicker than what we have investigated in our work. The very nature of plumes, whether plumes are purely thermal or temperature-driven, or whether there is also a compositional component to their formation, are issues that are now being addressed in geophysics," Ritsema said.

The computational demands of simulations in this study of wave propagation limited the number of plume structures, which can be more varied in shape, size, composition, and temperature than the solely thermal plume cases they considered.

"Our study is also the first to model wave propagation through plumes at frequencies as high as one-tenth of a hertz," Maguire said. "But we'd like to be able to push that even further to go to higher frequencies. And that means that it's going to be even more of a computational challenge. As the numerical tools that we use become more efficient, and as more high-performance computing clusters become available, that's something that we might be able to achieve in the future."

Said Maguire: "Understanding Earth dynamics is of fundamental importance, because we all live here and are affected by what goes on beneath our feet. The existence of mantle plumes and the role that they play in our planet is still a big question mark. Additionally, plumes have been linked to some of the biggest volcanic eruptions in the history of the Earth. And they're thought to potentially play a role in the largest mass extinction events that we have on geologic record. There's still a lot that we don't understand about them. Doing research into probing the nature of mantle plumes is of fundamental importance."

The above story is based on Materials provided by University of Texas at Austin, Texas Advanced Computing Center.