What Causes the Purple Color of Amethyst? 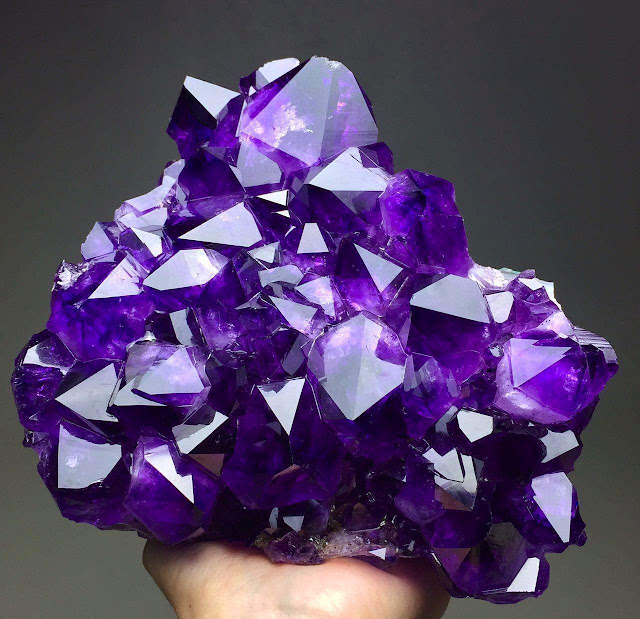 The color in amethyst comes from color centers in the quartz. These are created when trace amounts of iron are irradiated ( from the natural radiation in the rocks).

The purple color in ghost town glass comes from small amounts of manganese in the glass when it has been exposed to ultraviolet light. The manganese was used as a clarifying ingredient in glass from 1860 to 1915. Prior to that, lead was used, and subsequently, selenium is used.

Quartz will commonly contain trace amounts of iron ( in the range of 10's to 100's parts per million of iron). Some of this iron sits in sites normally occupied by silicon and some is interstitial ( in sites where there is normally not an atom). The iron is usually in the +3 valence state.

Gamma ray radiation ( from nuclear decay in the surrounding rocks ) can knock an electron from an iron lattice site and deposit the electron in an interstitial iron. This +4 iron absorbs certain wavelengths (357 and 545 nanometers) of light causing the amethyst color. You need to have quartz that contains the right amounts of iron and then is subjected to enough natural radiation to cause the color centers to form.

The color of amethyst has been demonstrated to result from substitution by irradiation of trivalent iron (Fe+3) for silicon in the structure, in the presence of trace elements of large ionic radius, and, to a certain extent, the amethyst color can naturally result from displacement of transition elements even if the iron concentration is low.

Amethyst occurs in primary hues from a light pinkish violet to a deep purple. Amethyst may exhibit one or both secondary hues, red and blue. The best varieties of amethyst can be found in Siberia, Sri Lanka, Brazil and the far East. The ideal grade is called "Deep Siberian" and has a primary purple hue of around 75–80%, with 15–20% blue and (depending on the light source) red secondary hues.

Amethyst can fade in tone if overexposed to light sources and can be artificially darkened with adequate irradiation.


Read also:
What Is Druzy, and How Does It Form?
Bloodstone: Interesting Facts About Heliotrope
What Is Pseudomorph Mineral?
Share to: