Is Hawaii's Kilauea Volcano Shooting Green Gems Into the Air? 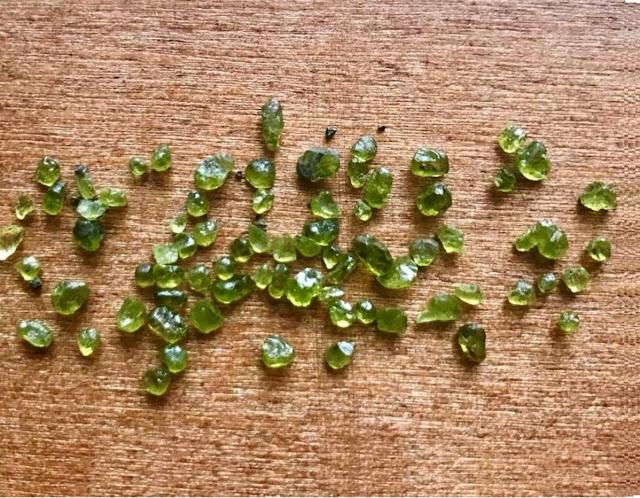 Hawaii's Kilauea volcano has been fiercely erupting for well over a month. Now, residents are finding little green gems that have fallen out of the sky during Kilauea's eruption.

Embedded in the lava still spewing some 130 feet into the air from Hawaii's Kilauea volcano are green crystals.

Called olivine, these minerals can turn Hawaiian beaches green, and it appears some of the green gems are raining down upon homes near the eruption or popping up near lava flows.

Olivine may be found in pieces of pumice — that is, rapidly cooled lava — or the gems may have been left behind when weaker lava rocks were crushed by car or foot traffic, she said.

It's not unusual for people to find olivine crystals in Hawaiian lava rock, whether it's ancient or new, as in the case of that produced since Kilauea began erupting on May 3.

Friends of mine live in Hawaii, right next to the area impacted by the most recent lava flows. In the midst of the destruction nearby & stress of the unknown, they woke up to this - tiny pieces of olivine all over the ground. It is literally raining gems. Nature is truly amazing. pic.twitter.com/inJWxOp66t
— Erin Jordan (@ErinJordan_WX) June 11, 2018


Common in the Earth's subsurface, olivine is a mineral containing magnesium, iron and silicate. In some cases, the green crystals work up to the surface of old lava rocks under normal weathering conditions.

But in events like the continuing Kilauea eruption, the olivine can be separated from the lava in explosive ocean eruptions that break the lava into smaller pieces, fast-tracking the separation process, Stovall said.

The lava flows themselves are spectacular displays of the volcano's force. These curtains of fire make for art-worthy pictures of blaze orange on a canvass of black, charcoal gray or metallic silver.

Behind the stunning photographs, of course, is devastation left by Kilauea's relentless eruptions, which began May 3 and so far have covered 9.1 square miles with hot lava. On Tuesday, the volcano was still producing a large, channelized flow entering the ocean at Kapoho. As many as 700 homes have been destroyed.

The crystals may be flying through the air from exploded bits of lava, but it's unlikely they're also coming from the volcano's summit, where there's been a large plume of steam and ash erupting from the crater — and at times rare, explosive eruptions.

"One thing I can say is that olivine is not raining out of the plume," Michael Poland, a USGS volcanologist, said over email.

Poland added that olivine is common on the ground regardless, because roads in Hawaii are made up of ground up olivine-rich lava rock.

The little crystals, however, are not being created during the eruption. They've been formed deep underground long ago, brewing in the molten rock.

"It really is one of the first things to form," said Stovall.

And olivine might not be the only crystal falling down inside the nearby neighborhood.

"It's possible that other crystals are being found," said Stovall, adding that a USGS rock specialist said olivine is difficult to tell apart from another common crystal, called clinopyroxene.

It's also quite possible nearby islanders will continue to find semi-translucent crystals on the ground. The eruption, over a month old now, shows no signs of relenting, and could very well last months — or longer.