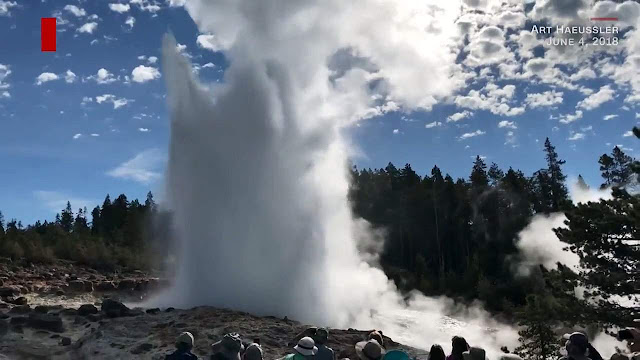 Yellowstone National Park's Steamboat Geyser is the region's largest and up until 2018, it's also erupted quite infrequently, often lying quiet for years. But over the past few months it has sprung to life and now seems to be erupting somewhat on a schedule, at least for the moment.

Just after 1 a.m. Monday it sent boiling water hundreds of feet in to the air for the ninth time this year. Before this recent string of eruptions, Steamboat had been dormant since 2014.

"Major eruptions over the past several weeks have been occurring with surprising regularity (every 6 to 8 days)," wrote Jamie Farrell, Chief Seismologist of the Yellowstone Volcano Observatory (YVO).

In fact, its latest eruption came just as his article for the YVO's website was being published early Monday, right on time, seven days after eruption number eight.

Like most of its previous 2018 eruptions, it went off overnight, when visitors are not allowed to check it out up close. But it shot off for the eighth time on June 4 during visiting hours and Farrell was on site to witness it.

"If there was one thing to remember about the Steamboat eruption, it was the noise," Farrell explains. "The "roar" was just as impressive as the visual spectacle. Every once in a while, rocks (some baseball sized) were ejected with the water to astonishing heights."

"We see gas emissions. We see all kinds of thermal activity. That's what Yellowstone does. That's what it's supposed to do. It's one of the most dynamic places on earth," Poland said.

The least predictable geyser in the park is Steamboat. It could erupt in five minutes, five years -- even 50 years from now. Yet no one visiting Yellowstone wants to turn away from the sight.

"That would be the chance of a lifetime," one visitor said. "I would be amazed."

Timing is everything, and only a lucky few get to see it. Poland's team of volcanologists are using thermal-imaging equipment to track the temperature of the 50-mile-wide magma field. They also monitor 28 seismographs since a super volcano would include major earthquake activity.

That so much is happening now is a boon not just for scientists, but for science enthusiasts like Hannah Gilbert.

"This is amazing," she said. "This is a nerd's paradise."