Watch This Whirlwind of Lava at Hawaii's Most Active Volcano 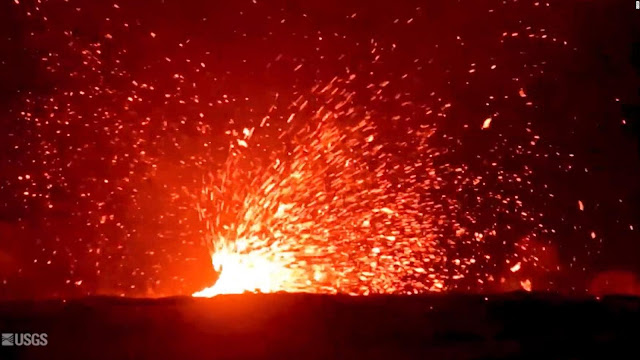 A whirlwind of lava has been captured on video near Hawaii's Kilauea volcano.

The spectacle is caused when "hot gases rise and punch through the cooler air above, to create a vertical column of hot air," according to the US Geological Survey. It started and stopped over the course of about 10 minutes.

The whirlwind occurred at Fissure 8 on June 30. Video of the event was released Monday. The fissure's eruption sent lava about 180 feet into the air, the USGS said.

Kilauea is Hawaii's most active of the state's five volcanoes, and in recent weeks, several craters have collapsed, causing more than 4,000 earthquakes -- most of them with a force equivalent to an earthquake of magnitude registering between 2 and 3, according to data from the Hawaiian Volcano Observatory.

The latest explosion happened Monday, registering as a 5.3 magnitude earthquake with an ash plume reaching about 1,200 feet.

So far, lava from Kilauea has covered 10.2 square miles of land.

The aviation code, which dictates whether planes and other air vehicles are safe to travel through the area, has been downgraded from red to orange, which means "major volcanic eruption is imminent, underway, or suspected but it poses limited hazards to aviation because of no or minor volcanic-ash emissions," according to USGS.

USGS also warns people against going into the ocean, as eroded land and lava are making their way down the volcanic incline. When lava hits water, it creates smoke-like "laze," or lava and haze. This haze is filled with hydrochloric acid and volcanic particles that irritate the eyes, skin and lungs.

Volcanic glass, or obsidian particles, have also been drifting in the air, USGS said.