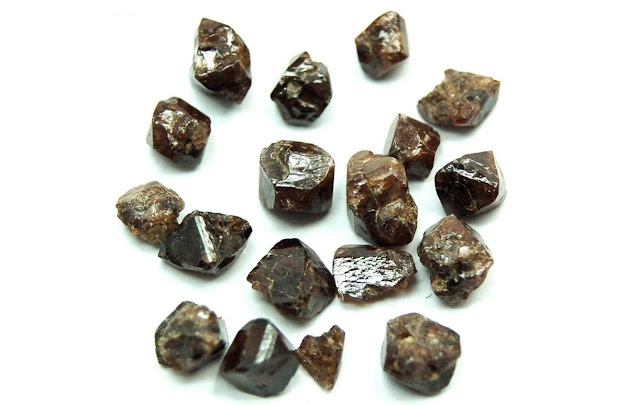 What did earth look like more than 4 billion years ago? This was before humans carved its wonders on stone, before trees etched the seasons in their rings, before plate tectonics buckled Earth’s surface to expose the ancient layers in growing mountain belts.

But scientists do have some clues in the form of an extremely tough mineral known as zircon.

Zircon crystals are almost indestructible; some still around today are nearly 4.4 billion years old. They're like tiny time capsules that retain the chemical fingerprints of this extremely early time. “This is basically our only window into the formative stages of our planet,” says Dustin Trail of the University of Rochester.

By decoding these chemical clues, scientists are slowly teasing out the environments that fostered the earliest glimmers of life. But exactly what the surface looked like at that time has long remained a mystery. Now, in a new study published in Proceedings of the National Academy of Sciences, Trail and his colleagues pick apart the enigma.

Using the chemical fingerprints of zircons, the team identified an array of sediments likely present on early Earth, where the oldest biochemical reactions could have brewed.

When Earth first formed, more than 4.5 billion years ago, its surface likely looked nothing like it does today. Scientists often paint this period—aptly named the Hadean after Hades, the Greek god of the underworld—as a fiery hellscape under constant meteoric assault, replete with volcanoes gurgling lava at the surface.

But all of this is based on inference—no physical evidence remains from Earth's first few hundred million years. “The Earth has done a great job erasing some of that information,” Trail says. Our planet is the ultimate recycler. Plate tectonics constantly repurpose old rock into new, and lava flows harden into fresh landscapes.

Zircon crystals, however, are so tough that they often survive the intense temperatures and pressures of this recycling process, retaining clues about the environments in which they originally formed. Using zircon oxygen isotopes, researchers previously discovered that liquid water covered parts of our planet some 4.3 billion years ago, suggesting the surface cooled just a few hundred million years after our planet’s formation. And just last year, researchers found what they believe might be hints of early life in the form of carbon-rich inclusions in 4.1-billion-year-old zircons.

But aside from these glimpses, the scenery on Earth’s surface during this time—including the environments that might have fostered these earliest sparks of life—largely remain a mystery.

“If we can begin to constrain the types of materials that are around at that time,” Trail says, “that perhaps pushes us one step closer to understanding how biochemical reactions, or prebiotic reactions, may have utilized the crust at that time as a substrate.”

For answers, Trail and his colleagues turned to silicon and oxygen. Together, these elements make up roughly 75 percent of the rocks on Earth today, he explains. And both have a useful feature: they have more than one type, or isotope.

The formation, and transformation, of rocks changes their isotopic fingerprint. For example, rocks that form from cooling lava have vastly different signatures than clays that come from weathered rocks. And zircons—themselves starting off as different rock and sediment types before being buried deep in the Earth, melting, and then crystallizing—still hold the signature of those early sediments.

To conduct the delicate analysis of silicon and oxygen contained in the zircons, the team turned to the high-resolution ion microprobe at the University of California, Los Angeles, which shoots a fine beam of charged atoms at the tiny samples and measures the ejected ions that bounce back.

For the test, they collected zircons just older than 4 billion years—each about 100 microns across or roughly the width of a human hair—from the Jack Hills region of Western Australia. They compared the chemistry of these ancient minerals to that of younger zircons with more definitive origins as a “bridge” to help interpret the different ratios of isotopes, Trail explains.

A Picture of Early Earth

More than half of the ancient zircons tested reveal early interactions between water and rock, in a range of different environments.

Some zircons contain the chemical signatures of rocks weathered by water to form clay. Other zircons bear the signatures of dissolved minerals that crystallize to form rocks like chert or banded iron formations in lakes or oceans. Still others have the signature of a process known as serpentinization, so called for its snake-skin-like texture and color. During this process, water reacts with rocks enriched in iron and magnesium, incorporating itself into the mineral structures.

Most importantly, each of these processes creates a new environmental niche that could foster early biochemical reactions, the glimmers of early life.

“That's a pretty cool result,” says Elizabeth Bell, a geochemist at the University of California, Los Angeles, who was not involved in the work. Many of these processes are largely indistinguishable from oxygen isotopes alone, she notes, calling the use of silicon "really significant.”

Bell led the 2017 work that identified hints of a biosphere in 4.1-billion-year-old zircons. These latest results bolster her findings and other interpretations of early Earth. “It sort of all comes together in a nice picture,” she says.

Everything around (and within) us once came from stardust, and the early processes that formed every molecule, mineral, and complex organism of today—from your cell phone to the food you eat to the heart pumping in your chest. And scientists are just beginning to tease out their origins.

“We're at a really interesting point,” Trail says. “We're beginning to really piece together what our planet was like more than 4 billion years ago. And that's pretty exciting.”


The above post is reprinted from National Geographic.
The study published in Proceedings of the National Academy of Sciences.
Share to: