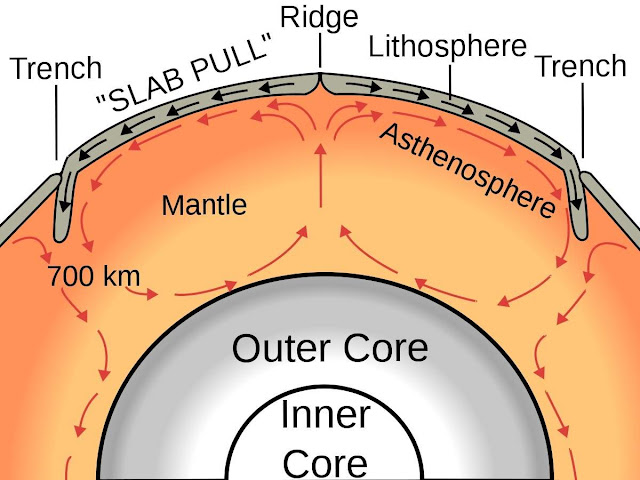 Do tectonic plates move because of motion in the Earth's mantle, or is the mantle driven by the movement of the plates? Or could it be that this question is ill-posed? This is the point of view adopted by scientists at the École Normale Supérieure -- PSL, the CNRS and the University of Rome 3, who regard the plates and the mantle as belonging to a single system. According to their simulations, published in Science Advances, it is mainly the surface that drives the mantle, although the dynamic balance between the two changes over supercontinent cycles.

Which forces drive tectonic plates? This has remained an open question ever since the advent of plate tectonic theory 50 years ago. Do the cold edges of plates slowly sinking into the Earth's mantle at subduction zones cause the motion observed at the Earth's surface? Or alternatively, does the mantle, with its convection currents, drive the plates? For geologists, this is rather like the problem of the chicken and the egg: the mantle apparently causes the plates to move, while they in turn drive the mantle...

To shed light on the forces at work, scientists from the Geology Laboratory of the École Normale Supérieure (CNRS/ENS -- PSL), the Institute of Earth Sciences (CNRS/Universities Grenoble Alpes and Savoie Mont Blanc/IRD/Ifsttar) and the University of Rome 3 treated the solid Earth as a single indivisible system and carried out the most comprehensive modelling to date of the evolution of a fictional planet very similar to the Earth.

The scientists first had to find the appropriate parameters, and then spend some nine months solving a set of equations with a supercomputer, reconstructing the evolution of the planet over a period of 1.5 billion years.

Using this model, the team showed that two thirds of the Earth's surface moves faster than the underlying mantle, in other words it is the surface that drags the interior, while the roles are reversed for the remaining third. This balance of forces changes over geological time, especially for the continents.

The latter are mainly dragged by deep motion within the mantle during the construction phases of a supercontinent, as in the ongoing collision between India and Asia: in such cases, the motion observed at the surface can provide information about the dynamics of the deep mantle. Conversely, when a supercontinent breaks up, the motion is mainly driven by that of the plates as they sink down into the mantle.

The computation contains a wealth of data that remains largely unexploited. The data obtained could help us to understand how mid-ocean ridges form and disappear, how subduction is triggered, or what determines the location of the plumes that cause vast volcanic outpourings.


The above story is based on Materials provided by CNRS.
Share to: