Protein Discovered Inside a Meteorite 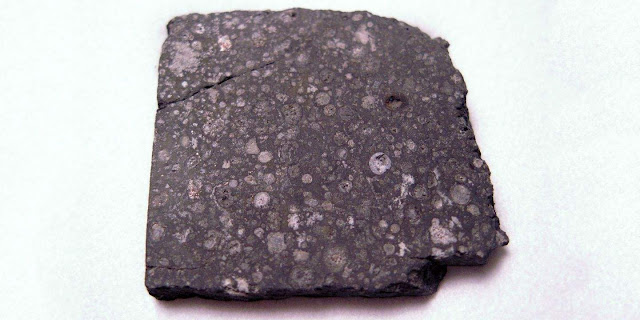 A new discovery could be a clue for us to see if life could emerge elsewhere in the Solar System. Using a new analysis technique, scientists think they have found an extraterrestrial protein, tucked inside a meteorite that fell to Earth 30 years ago.

If their results can be replicated, it will be the first protein ever identified that didn't originate here on Earth.

"This paper characterises the first protein to be discovered in a meteorite," the researchers wrote in a paper uploaded to preprint server arXiv. Their work is yet to be peer reviewed, but the implications of this finding are noteworthy.

Over the last few years, meteorites from the wider Solar System have been yielding some building blocks for life as we know it. Cyanide, which could play a role in building molecules necessary for life; ribose, a type of sugar that is found in RNA; and amino acids, organic compounds that combine to form proteins.

Researchers have now revisited the meteorites that yielded the latter. Led by physicist Malcolm McGeoch of superconductor X-ray source supplier PLEX Corporation, the team focussed their search for something more.

Using "state-of-the-art" mass spectrometry, they found what they believe to be protein in a meteorite called Acfer 086, found in Algeria in 1990.

While not proof of extraterrestrial living creatures, this protein discovery makes for yet another of life's building blocks to be found in a space rock. There are many processes that can produce protein, but life, as far as we know, can't exist without it.

"In general, they're taking a meteor that has been preserved by a museum and has been analysed previously. And they are modifying the techniques that they're using in order to be able to detect amino acid inside of this meteor, but in a higher signal ratio," astronomer and chemist Chenoa Tremblay of CSIRO Astronomy & Space Science in Australia, who was not involved in the research.

Not only did the team find the glycine amino acid with a stronger signal than previous analysis, they found that it was bound with other elements, such as iron and lithium. When they performed modelling to see what was occurring, they found that the glycine wasn't isolated; it was part of a protein.

The researchers are calling this newly discovered protein hemolithin. While hemolithin is structurally similar to terrestrial proteins, its ratio of deuterium to hydrogen was not matched by anything on Earth. It is, however, consistent with long-period comets.

This suggests, the researchers argue, that the structure they have identified as protein is of extraterrestrial origin, and possibly formed in the proto-solar disc, over 4.6 billion years ago.

But, they also note that there's a possibility what they found might not be protein. Although the team thinks it's the most likely explanation, it's also possible that their finding is actually a polymer - a broad class of molecules, of which proteins are only one.

So it's a little too early to get too carried away. But, overall, Tremblay is impressed with the work.

"I think this is really exciting," she said. "I think that it's got a lot of really interesting implications and a lot of compelling arguments. And I think it's a really great step forward."

There are several next steps that the research could take. Other scientists can take the spectra, and use modelling software to try to replicate structures that produce the same or similar spectra. That could help determine whether we're looking at protein or a different kind of polymer.

Similar techniques could now be used on other meteorites in which amino acids have been found, to see if similar structures can be found.

As Tremblay explains, recent studies on the International Space Station have indicated that "protein should be easier to make in space because of the reduced gravity", and astronaut scientists have actually managed to produce quite large protein molecules, stable enough to bring down to Earth.

"So we're pretty sure that proteins are likely to exist in space," she says. "But if we can actually start finding evidence of their existence, and what some of the structures and the common structures might be, I think that's really interesting and exciting."


The above story is based on materials provided by  Cornell University.
Share to: