Diamonds don't exist naturally in West Virginia, yet one of the largest ever found was discovered accidentally in a horseshoe pit in Monroe County in 1928.

Geologists are still at a loss to explain how it got there, though speculation has never died down.

The diamond is an uncut naturally formed dodecahedral crystal, with 12 natural facets, weighing 34.48 carats and has a white color with a bluish tinge. It has the rare distinction of being the largest alluvial diamond ever discovered in North America. The bluish tinge is probably caused fluorescence.


History of the Diamond

On a certain day in April 1928, when William P. Jones (Punch Jones), and his father Grover C. Jones Sr. were pitching horseshoes, on the land surrounding their residence, in Peterstown, West Virginia, they noticed a shiny stone on the ground, which they thought was a shiny piece of quartz commonly found in the area. One of them casually picked up the stone and carried it into the tool shed, where he just deposited it in a wooden cigar box.

The whole incident was forgotten for the next 14 years, and the stone remained undisturbed in the wooden cigar box. Even if the stone had been re-discovered from the box during this period, it would not have had any impact, as this period corresponded with the period of the "Great Depression," a period of harsh adversity, precipitated by a worldwide economic downturn, causing drastic declines in output, severe unemployment, and acute deflation. The depression was particularly long and severe in the United States and Europe.

In 1942, William P Jones-Punch, re-discovered the stone in the wooden cigar box, dumped in the tool shed. This time he became very inquisitive about the stone, and was determined to find out more about the stone, it's nature and if it had any monetary value. He carried the stone to Virginia Polytechnic Institute (VPI)-now Virginia Tech- in nearby Blacksburg, Virginia, and met the professor of Geology, Holden, who examined the stone. After a careful examination of the stone, the Professor concluded that the stone was a diamond, The Professor was genuinely shocked at Punch's discovery, as this was the first time he was seeing an alluvial diamond of that size, discovered from North America. 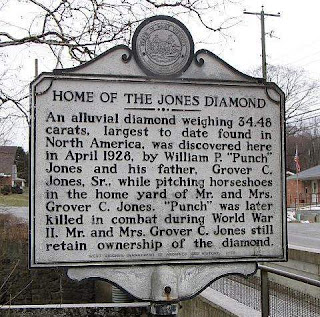 Having removed the stone from the Institution's custody, the Jones family deposited it in a safe deposit box in the First Valley National Bank , in Rich Creek, Virginia. Twenty years later in 1984, the Joneses sold the diamond for an unspecified amount to an anonymous buyer, at a Sotheby's auction held in New York.