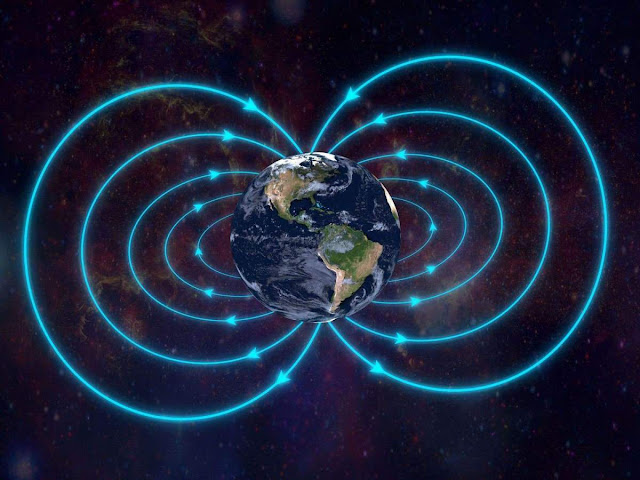 Scientists using simulations in the lab have revealed that changes in the direction of the Earth's magnetic field may take place 10 times faster than previously thought.

A new study by the University of Leeds and University of California at San Diego reveals that changes in the direction of the Earth's magnetic field may take place 10 times faster than previously thought.

Their study gives new insight into the swirling flow of iron 2800 kilometres below the planet's surface and how it has influenced the movement of the magnetic field during the past hundred thousand years.

Our magnetic field is generated and maintained by a convective flow of molten metal that forms the Earth's outer core. Motion of the liquid iron creates the electric currents that power the field, which not only helps guide navigational systems but also helps shield us from harmful extra terrestrial radiation and hold our atmosphere in place.

The magnetic field is constantly changing. Satellites now provide new means to measure and track its current shifts but the field existed long before the invention of human-made recording devices. To capture the evolution of the field back through geological time scientists analyse the magnetic fields recorded by sediments, lava flows and human-made artefacts. Accurately tracking the signal from Earth's core field is extremely challenging and so the rates of field change estimated by these types of analysis are still debated.

Now, Dr Chris Davies, associate professor at Leeds and Professor Catherine Constable from the Scripps Institution of Oceanography, UC San Diego, in California have taken a different approach. They combined computer simulations of the field generation process with a recently published reconstruction of time variations in Earth's magnetic field spanning the last 100,000 years

Their study, published in Nature Communications, shows that changes in the direction of Earth's magnetic field reached rates that are up to 10 times larger than the fastest currently reported variations of up to one degree per year.

They demonstrate that these rapid changes are associated with local weakening of the magnetic field. This means these changes have generally occurred around times when the field has reversed polarity or during geomagnetic excursions when the dipole axis -- corresponding to field lines that emerge from one magnetic pole and converge at the other -- moves far from the locations of the North and South geographic poles.

The clearest example of this in their study is a sharp change in the geomagnetic field direction of roughly 2.5 degrees per year 39,000 years ago. This shift was associated with a locally weak field strength, in a confined spatial region just off the west coast of Central America, and followed the global Laschamp excursion -- a short reversal of the Earth's magnetic field roughly 41,000 years ago.

Similar events are identified in computer simulations of the field which can reveal many more details of their physical origin than the limited paleomagnetic reconstruction.

Their detailed analysis indicates that the fastest directional changes are associated with movement of reversed flux patches across the surface of the liquid core. These patches are more prevalent at lower latitudes, suggesting that future searches for rapid changes in direction should focus on these areas.

Dr Davies, from the School of Earth and Environment, said: "We have very incomplete knowledge of our magnetic field prior to 400 years ago. Since these rapid changes represent some of the more extreme behaviour of the liquid core they could give important information about the behaviour of Earth's deep interior."

Professor Constable said: "Understanding whether computer simulations of the magnetic field accurately reflect the physical behaviour of the geomagnetic field as inferred from geological records can be very challenging.

"But in this case we have been able to show excellent agreement in both the rates of change and general location of the most extreme events across a range of computer simulations. Further study of the evolving dynamics in these simulations offers a useful strategy for documenting how such rapid changes occur and whether they are also found during times of stable magnetic polarity like what we are experiencing today."


The above story is based on Materials provided by University of Leeds.
Share to: