A massive lava lake was firmed in the belly of Kilauea volcano in Hawaii when it erupted in 2018. The water inside it has been bubbling since then and was known as the world's hottest body of water with temperatures ranging from 176 degrees Fahrenheit to 185 degrees Fahrenheit.

The lake is as deep as One World Trade Center in New York City said the US Geological Survey who is closely monitoring it. But scientists are baffled about it as there are only a few volcanic lakes that reach above 176F. They believe it might be a sign of upcoming hazards, such as steam-blast explosions.

Between 2010 and 2018, a large lava lake bubbled and spattered within Kilauea’s summit caldera. Then in May 2018, as part of a broader eruption that poured lava from fissures to the east, the lake swiftly drained and part of the caldera floor collapsed. This left a hole nearly as deep as One World Trade Center.

But that was not all Pele had in store. For about a year, the much-deeper and wider Halema‘uma‘u crater was relatively quiet. But in July 2019, helicopter pilots began to notice water pooling into a pond in the lowest part of the crater. Water levels have risen steadily ever since. Today, the lake—now with a rusty brown sheen on its surface due to chemical reactions taking place in the water—has an area larger than five football fields combined and a maximum depth of roughly 30 meters (100 feet). 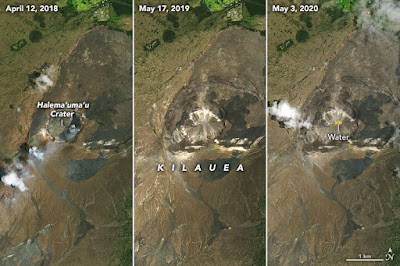 The sequence of satellite images above shows Halema‘uma‘u crater before the lava lake drained (left), after the caldera floor had collapsed (middle), and after water pooled on the crater floor for nine months (right). The Operational Land Imager (OLI) on Landsat 8 acquired all three natural-color images.

When the lava lake was present, it appeared in the southeast part of Halema‘uma‘u, though a crust of partially solidified lava on its surface made it appear gray from above. (The circular light gray area with a thin plume of volcanic emissions rising from it marks the location of the lake.) After the caldera collapse, the terrain surrounding the lake changed dramatically, including the formation of a new 140-meter cliff (thin dark line) north of the crater. In the final image, the pond on the summit appears small from Landsat's perspective (30 meters per pixel). The photograph below, taken on April 21, offers a better sense of scale.

The explanation for the new pond is simple. “We have a drill hole a little more than one kilometer south of the crater where we measure the level of the water table,” explained Don Swanson, a volcanologist at the U.S. Geological Survey’s Hawaiian Volcano Observatory. “We know that the crater floor dropped a little more than 70 meters below the water table in 2018. Any time that you punch a hole below the level of the water table, water is eventually going to come in and fill that hole.”

Explaining what the new pond means for the volcano is where the story gets more complicated and interesting. One of the key factors that controls explosive volcanic eruptions is how much water and other gases get caught up within the magma. If magma has a lot of dissolved gases and steam, pressure builds and explosive eruptions can result. If not, lava tends to flow gently from fissures in the ground—as has been the case at Kilauea for the past 200 years.

Calm eruptions are the exception, not the norm. Over the past 2,500 years, Kilauea has erupted explosively about 60 percent of the time, noted Swanson. “We have been misled by how calm it has been. If this was 1720 rather than 2020, then we would we would not have seen a lava flow for more than 200 years, and we may have thought Kilauea was always an explosive volcano.”

There are two scenarios that could lead to an explosive eruption. “In one case, magma could rise quickly up the conduit and intersect with the lake,” said Swanson. "In the second, the crater floor could collapse and drop all of the water down to a zone where it would be quickly heated into steam.”

But that does not mean the next eruption will be explosive. “The next eruption could happen slowly and the water could evaporate,” he said. “We do not want to be alarmist, but we also need to point out to the public that there is an increasing possibility of explosive eruptions at Kilauea.”

One thing is quite certain: geologists will be closely monitoring Kilauea and its new lake with every tool available, including seismometers, thermal cameras, drones, helicopter surveys, and satellites. “Is the volcano in the process of reverting back to an explosive period that may last for centuries?” said Swanson. “Or is this just a little blip, and we are going to return to quiet lava flows like we had during the 19th and 20th centuries? Only time will tell.”


The above story is based on materials provided by The Earth Observatory.
Share to: