Man Becomes Overnight Millionaire After Meteorite Crashes Through His Roof 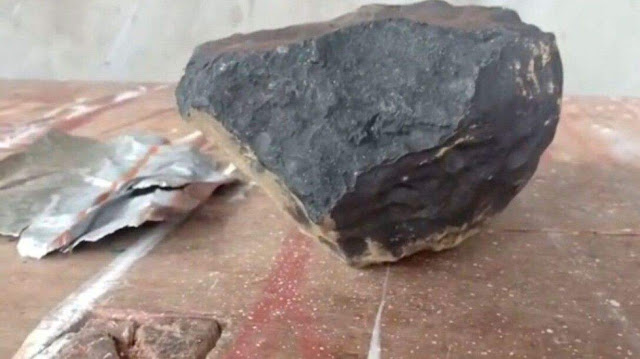 The space rock, which weighed around 2.1kg, turned out to be worth around US $1.85 million.

An Indonesian coffin maker became an instant millionaire when a meteorite worth US $1.85 million crashed through the roof of his house.

Josua Hutagalung, 33, was working on a coffin next to his house when the space rock smashed through the veranda at the edge of his living room in Kolang, North Sumatra.

The single stone, weighing 2.1kg, left a large hole in the tin roof and ended up buried 15cm deep in the soil beside the house.

Metoerites are priced by gram with the cheapest pure-rock varieties fetching  $0.50 to $5.00 per gram., and those with rare extra-terrestrial metals selling for up to $1,000 per gram.

Josua, who managed to dig the rock out, said the meteorite was still warm and partially broken when he touched it.

It is estimated to be 4.5 billion years old and is classified as CM1/2 carbonaceous Chondrite, an extremely rare variety - worth around $1.85million, or $857 per gram.

'When I lifted it, the stone was still warm and I brought it into the house,' he told Kompas.

He added: 'The sound was so loud that parts of the house were shaking too. And after I searched, I saw that the tin roof of the house had broken.

'I strongly suspect that this rock is indeed an object from the sky that many people call a meteorite. Because it is impossible someone deliberately threw it or dropped it from above.'

Local residents in the area had heard large booming sounds which shook their houses. Dozens have visited Josua's house to see the rare object. 'Many people have come, out of curiosity, and want to see the stone,' he said.

The meteorite, which is estimated to be 4.5 billion years old, is worth around £1.4 million. Josua was given the equivalent to 30 years' salary for the space rock, according to The Sun.

The father of three said he would use some of the money to build a church in his community.

'I have also always wanted a daughter, and I hope this is a sign that I will be lucky enough now to have one,' he told The Sun.

US meteorite expert Jared Collins, who secured part of the main mass, said: 'My phone lit up with crazy offers for me to jump on a plane and buy the meteorite.

'It was in the middle of the Covid crisis and frankly it was a toss-up between buying the rock for myself or working with scientists and collectors in the US.

'I carried as much money as I could muster and went to find Josua, who turned out to be a canny negotiator.'

Collins shipped the meteorite to the US, where it was bought by Jay Piatek, a doctor and meteorite collector from Indianapolis, according to the Lunar and Planetary Institute in Texas, US.

The meteorite is classified as CM1/2 carbonaceous Chondrite, an extremely rare variety, the Institute recorded.

Three further fragments of the meteorite were found in nearby areas when it crashed in August - one was discovered in a paddy field less than 3km from Josua's home.

The meteorite, which has been officially named as Kolang, is estimated to have a total weight of 2.5kg, according to the Lunar and Planetary Institute in Texas, US.

The interior of the meteor is dark grey and black, with small light-coloured speckles.

'It was a rock meteorite,' The Head of the National Aeronautics and Space Agency (Lapan), Thomas Djamaluddin, told Kumparan. He said it was a rare phenomenon for the meteorite to fall in a residential area.

He added: 'The amount of waste rock from the formation of the solar system is very large in space. Most of the meteorites fall in locations far from settlements, such as oceans, forests, or deserts.'

In August, as many as 200 fragments of a 4.6 billion-year-old meteorite fell in Santa Filomena, northeastern Brazil.
Share to: