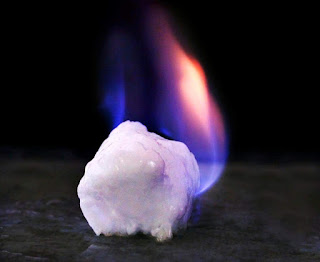 There's a weird type of 'ice' found in the ocean that burns when exposed to a flame - and scientists think they've finally solved the mystery of how this strange substance forms under the sea.

Gas hydrates, also known as 'flammable ice', are formed as gas gets trapped in lattices of water molecules - and it really does look a lot like strange, pockmarked ice.

This flammable ice is widely found inside minerals packed into clay-rich ocean sediments. The things is, the saltiness and pore size inside those minerals shouldn't be conducive to the formation of gas hydrates - and that's been puzzling experts until now.

Two researchers from the Korea Advanced Institute of Science and Technology (KAIST) have used a complex experimental electrical field setup to examine how water and clay interact, and how gas hydrates could start to form in those ocean sediments.

"Through this research, we gained better insight into the origin of gas hydrates occurrence in clay-rich sedimentary deposits," says one of the researchers, Tae-Hyuk Kwon.

"In the near future, we will soon be able to commercially produce methane gas from natural gas hydrate deposits."

The scientists found that the negatively charged surfaces of clay materials were crucial in causing this flammable ice to form. The energy seems to partially break the hydrogen-bonded water clusters, lowering the thermal energy of the water molecules.

Part of the reason scientists have been so keen to solve this mystery is that gas hydrates are seen as a viable alternative energy source – last year a team in China managed to extract natural gas from underwater flammable ice for the first time.

If the technique can be perfected and commercialised, we could be looking at an abundant new source for gas energy. Reserves could be greater than all other fossil fuels combined, according to estimates.

Because flammable ice relies on such a precise combination of temperature and pressure, trying to keep the substance stable enough to successfully extract is quite a challenge: but research like this latest study should help with that.

The new findings will also prove useful as engineers try and deal with the problem of hydrates clogging up drilling pipes.

Future research building on this study will need to examine the optimum conditions for the formation of gas hydrates, particularly in terms of the water molecule polarisation strength at different distances from the clay sediment.

However, we now know far more than we did before about how this amazing substance comes into being.

"An understanding of the association between gas hydrates and clay minerals is required as it is expected to play a significant role in the exploitation of methane production from hydrate deposits and CO2 storage in oceanic sediments," conclude the researchers.

The findings were published online in the journal Environmental Science and Technology.
Share to: