Earthquakes, Tectonic 6:04 AM
A+ A-
Print Email 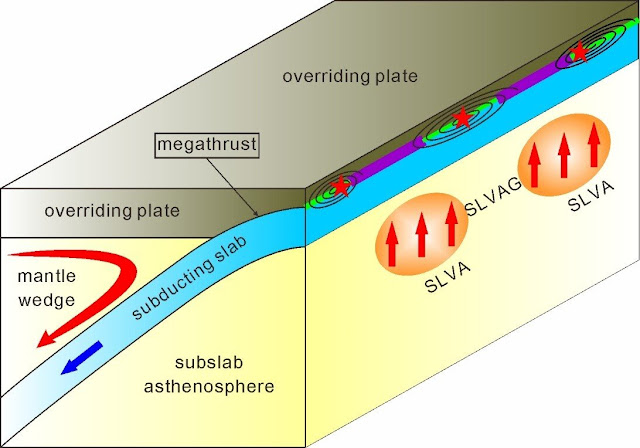 Earthquakes and volcanoes in subduction zones may cause great human catastrophe. Previous studies on subduction zone structure and causal mechanisms of giant megathrust earthquakes (M ≥ 9.0) have mainly focused on aspects like subducting plates and plate interfaces.

In contrast, the oceanic asthenosphere structure beneath the subducting slab (at depths of 100-250 km) and its influence on the nucleation of giant megathrust earthquakes have not been well studied.

Recently, Dr. Fan Jianke from the Institute of Oceanology of the Chinese Academy of Sciences (IOCAS) and Prof. Zhao Dapeng from Tohoku University turned their attention to this problem by investigating the oceanic asthenosphere structure of six subduction zones where giant earthquakes have occurred.

However, critical shear stress is still large enough and relatively easier to reach. As such, it can induce a giant megathrust earthquake above the slow anomaly gap, which is primarily controlled by structural heterogeneity on and around the plate interface.

In addition, the buoyancy force of the slow anomaly can cause a morphological response from the subducting slab, thus increasing the shear stress on the plate interface. Thermal conduction or thermo-mechanical erosion from the slow anomaly may result in transformation of the interface rheology from frictional to viscous shear.

This transformation may partly account for the occurrence of slow-slip earthquakes above slow anomalies. The slow-slip area can impede rupture propagation and host afterslip of a giant megathrust earthquake.

"It's necessary to conduct seismic tomography to investigate more detailed asthenospheric structures beneath a subducting slab, which may pinpoint the potential location of a future giant megathrust earthquake," said Dr. Fan.

The above story is based on materials provided by Chinese Academy of Sciences.