Mineral Previously Known Only in Meteorites Discovered at Dead Sea 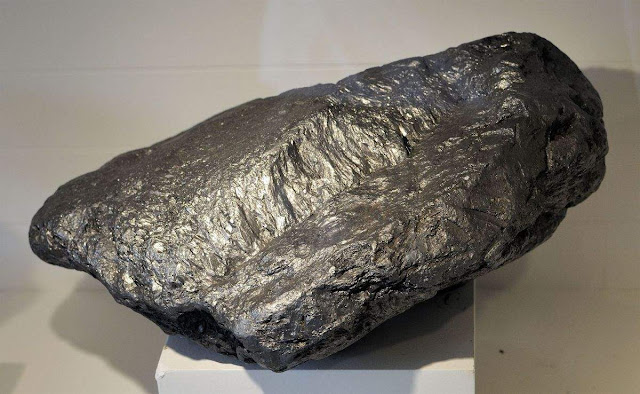 Allabogdanite was first reported in the early 2000s from the Onello—a small iron meteorite recovered from the gold placer at the Bolshoi Dolguchan River in Eastern Yakutia. Chemically, the mineral belongs to phosphides—the compounds containing phosphorus in a negative oxidation state.

It was named in honor of the crystallographer Alla Bogdanova. Since then, allabogdanite has been identified in several iron meteorites. The recent discovery at the Dead Sea is the first confirmation of the mineral on Earth. Allabogdanite was detected in the course of a systematic study of terrestrial phosphides from the Dead Sea region.

"Our research included the experiments on phase transitions of terrestrial allabogdanite at high pressure and high temperature at the DESY synchrotron light source in Germany," said Sergey Britvin, the main author of the article, professor in the Department of Crystallography at St Petersburg University.

"It has been found that terrestrial allabogdanite could be formed at pressures exceeding 25 gigapascals that corresponds to ca. 250 kbar. Such high pressures on Earth can be attained during catastrophic collisions with large meteorite impactors, or at the Earth's mantle conditions, at a depth of more than 500 kilometers.

However, the discovery of terrestrial allabogdanite is associated with the surface rocks of the Hatrurim Formation (also known as the Mottled Zone) in the Negev Desert in Israel. This is the area where natural cyclophosphates have been recently discovered."

Professor Sergey Britvin added that the discovery of allabogdanite in the historical region of the South Levant in the Middle East raises many questions related to the formation conditions of surficial rocks in this region.

Despite the fact that allabogdanite was discovered in meteorite almost 20 years ago, it was only in 2008 that it was shown that the mineral belongs to the indicators of high pressure. The results of current research evidence that terrestrial allabogdanite is a metastable high pressure phase. It was formed as a result of transformation from another mineral—barringerite, and was preserved under normal conditions as a result of quenching—an abrupt release of temperature and pressure.

"This way excludes the possibility of allabogdanite formation as an intermediate phase from the elements under atmospheric pressure. This, in turn, raises a number of key questions regarding the origin of rocks in the Mottled Zone.

Until now, no evidence for the large meteorite collisions or the rocks having Earth's mantle origin has been found in the South Levant. However, such evidence might have been 'erased' from the Earth's surface as a result of later processes of geological erosion. The discovery of allabogdanite justifies the necessity of further research in this direction," said Professor Sergey Britvin.

The above story is based on materials provided by St. Petersburg State University.