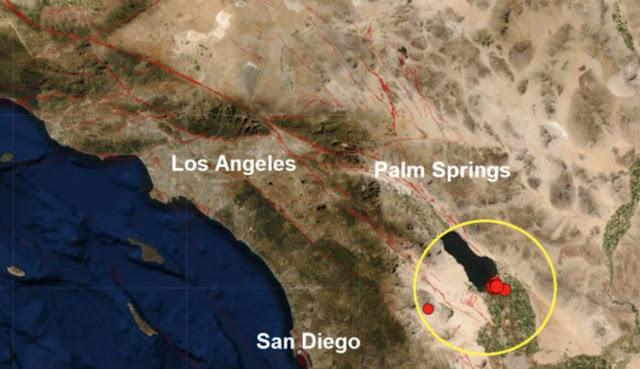 A rural area of Southern California near the Mexico border and along the San Andreas fault line saw more than 600 earthquakes in a 24-hour period.

California and Oregon dealt with several earthquakes since Friday, with the highest registering at 5.3 on the Richter scale.

According to the USGS map, the majority of the earthquakes occurred near the city Calipatria, which lies alongside the San Andreas Fault and is about 30 miles north of the Mexican border.

The strength of the quakes varied, with the strongest coming in at 5.3.

The USGS map showed four of the earthquakes measuring above a 4 on the Richter scale, and at least 29 registering above a 3.

California was not the only state on the West Coast to be affected, as two earthquakes near a magnitude of 6 occurred very close to Oregon on Friday, and even more on Sunday morning, ranging from 3.9 to 5.9.

The San Andreas Fault is a continental transform fault that extends roughly 1,200 kilometers through California. It forms the tectonic boundary between the Pacific Plate and the North American Plate, and its motion is right-lateral strike-slip.