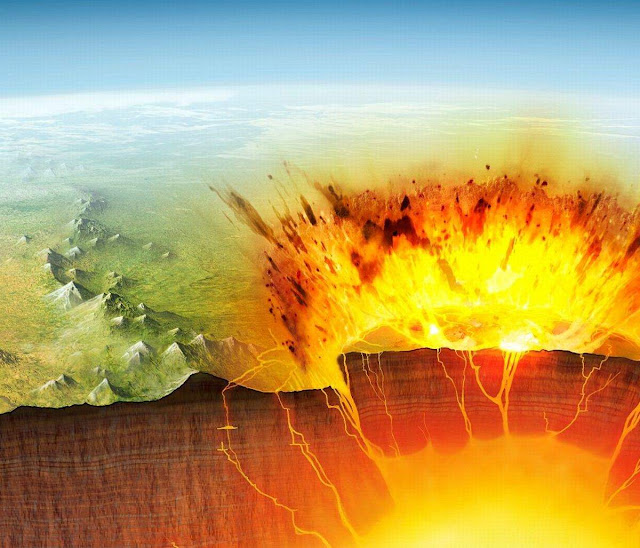 The subterranean "plumbing system" of superheated water that feeds Yellowstone National Park's geysers and other hydrological features has been mapped out in stunning detail — and the findings could fill a major knowledge gap that experts have described as a "mystery sandwich."

The geysers and fumaroles of Yellowstone National Park are among the most iconic and popular geological features on our planet. Each year, millions of visitors travel to the park to marvel at the towering eruptions of Old Faithful, the bubbling mud cauldrons of Artists Paint Pots, the crystal-clear water and iridescent colors of Grand Prismatic Spring, and the stacked travertine terraces of Mammoth Hot Springs.

Those who have visited the park may have asked themselves, “Where does all the hot water come from?” A study published this week in Nature, co-authored by Virginia Tech’s W. Steven Holbrook and colleagues from the U.S. Geological Survey and Aarhus University in Denmark, provides stunning subsurface images that begin to answer that question.

“The combination of high electrical conductivity and low magnetization is like a fingerprint of hydrothermal activity that shows up very clearly in the data,” said Holbrook, a professor of geophysics and head of the Department of Geosciences in Virginia Tech’s College of Science. “The method is essentially a hydrothermal pathway detector.”

Images from the study show that the park’s geology profoundly shapes its hot springs. Hot hydrothermal fluids ascend nearly vertically, from depths of more than 1 km (or .62 miles), to arrive at the park’s major hydrothermal fields. Along the way, they mix with shallower groundwater flowing within and beneath the park’s volcanic lava flows, which also are visible in the images. Faults and fractures guide the ascent of hydrothermal waters, while lava flow boundaries control the shallow groundwater aquifers.

The project fills in a longstanding knowledge gap about the underpinnings of Yellowstone’s charismatic hydrothermal features. Much is known about the park’s surface hydrothermal features, including the chemistry and temperature of mud pots and springs, the eruption interval of geysers, and the unique thermophilic bacteria that live in and around those features.

Likewise, scientists have a growing body of knowledge about the deeper heat sources and tectonic activity by tracking earthquakes that occur there. But little is known about how the surface hydrothermal features are connected to each other and to the deeper sources of heat and fluids.

“Our knowledge of Yellowstone has long had a subsurface gap,” Holbook said. “It’s like a ‘mystery sandwich’ — we know a lot about the surface features from direct observation and a fair amount about the magmatic and tectonic system several kilometers down from geophysical work, but we don’t really know what’s in the middle. This project has enabled us to fill in those gaps for the first time.”

To collect the data, the team used a unique instrument called “SkyTEM” that consists of a large loop of wire towed beneath a helicopter. As the helicopter flies, the loop sends downward repeated electromagnetic signals that provoke a response from electrically conductive bodies in the subsurface.

That response is recorded and later analyzed to produce detailed cross-sections along the flight lines. The technique is highly effective in environments like Yellowstone: hydrothermal fluids alter the rocks they pass through, turning rock into clay minerals — for example, the surface mud pots — that have heightened electrical conductivity but suppressed magnetization.

Because the helicopter is able to travel at speeds of 40 to 50 mph while towing the SkyTEM instrument, scientists involved in the study were able to cover large swaths of the sprawling, 3,500-square-mile national park, Holbrook said.

“One of the unique aspects of this dataset is its extensive coverage of this huge system,” Holbrook added. “We were able not just to look deep beneath the hydrothermal features, but also to see how adjacent features might be connected in the subsurface across great distances. That’s never been possible before.”

One of the mysteries addressed by the new work is whether different hydrothermal areas in the park show contrasting deep fluid sources and pathways. The team found a remarkable similarity in the deep structure beneath areas such as Norris Geyser Basin and Lower Geyser Basin, suggesting that contrasts in the chemistry and temperatures of those areas are not caused by deep processes. Instead, variable degrees of mixing with shallow groundwater likely create the wide variety of hot spring characteristics in the park.

Overall, the project generated more than 2,500 miles of helicopter lines, an enormous amount of data, according to Holbrook. Upon the study’s publication last month, the research team released the data so that others can undertake additional research.

“The data set is so big that we’ve only scratched the surface with this first paper,” Holbrook added. “I look forward to continuing to work on this data and to seeing what others come up with, too. It’s going to be a data set that keeps on giving.”

Before coming to Virginia Tech in 2017, Holbrook was part of the Department of Geology and Geophysics at the University of Wyoming in Laramie, Wyoming. He also co-directed the Wyoming Center for Environmental Hydrology and Geophysics. He said, “I’ve made several field trips to collect ground-based geophysical data in Yellowstone. The airborne data covers a lot more ground much more quickly than we could by hiking gear into the backcountry, though.”

Carol Finn of the U.S. Geological Survey and lead author on the study said, “While the airborne data were still being collected, we saw the first images over Old Faithful and knew instantly that our experiment had worked — that we could, for the first time, image the fluid pathways that had long been speculated.”

She added, “Our work has sparked considerable interest across a range of disciplines, including biologists looking to link areas of groundwater and gas mixing to regions of extreme microbiological diversity, geologists wanting to estimate volumes of lava flows, and hydrologists interested in modeling flow paths of groundwater and thermal fluid. With the paper as a guide and the release of the data and models, we will enable research in these diverse scientific communities.”

One mystery that Holbrook is interested in pursuing further is evidence for distant connections between isolated surface hydrothermal areas. The SkyTEM data show evidence for subsurface linkages between hydrothermal systems that are up to 6 miles apart.

“That might have implications for the co-evolution of thermophilic bacteria and Archaea,” Holbrook said. “The notion that airborne geophysical data could illuminate something about the life of microscopic organisms living around hot springs is a fascinating idea.”

The above story is based on materials provided by Virginia Polytechnic Institute and State University.