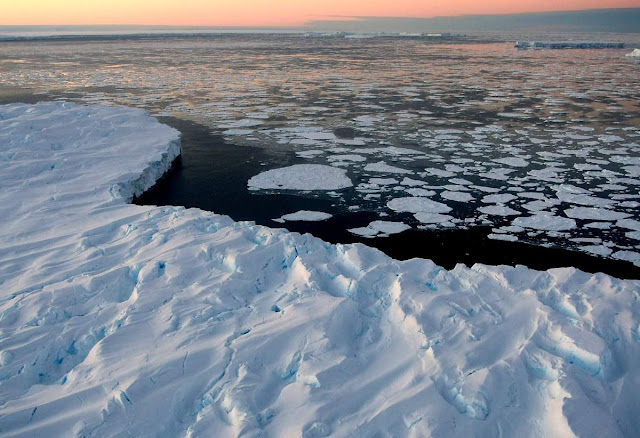 A long-dormant underwater volcano near Antarctica has woken up, triggering a swarm of 85,000 earthquakes.

Volcanoes can be found even off the coast of Antarctica. At the deep-sea volcano Orca, which has been inactive for a long time, a sequence of more than 85,000 earthquakes was registered in 2020, a swarm quake that reached proportions not previously observed for this region. The fact that such events can be studied and described in great detail even in such remote and therefore poorly instrumented areas is now shown by the study of an international team published in the journal "Communications Earth and Environment." Led by Simone Cesca from the German Research Centre for Geosciences (GFZ) Potsdam, researchers from Germany, Italy, Poland and the United States were involved. With the combined application of seismological, geodetic and remote sensing techniques, they were able to determine how the rapid transfer of magma from the Earth's mantle near the crust-mantle boundary to almost the surface led to the swarm quake.

The Orca volcano between the tip of South America and Antarctica

Swarm quakes mainly occur in volcanically active regions. The movement of fluids in the Earth's crust is therefore suspected as the cause. Orca seamount is a large submarine shield volcano with a height of about 900 metres above the sea floor and a base diameter of about 11 kilometres. It is located in the Bransfield Strait, an ocean channel between the Antarctic Peninsula and the South Shetland Islands, southwest of the southern tip of Argentina.

"In the past, seismicity in this region was moderate. However, in August 2020, an intense seismic swarm began there, with more than 85,000 earthquakes within half a year. It represents the largest seismic unrest ever recorded there," reports Simone Cesca, scientist in GFZ's Section 2.1 Earthquake and Volcano Physics and lead author of the now published study. At the same time as the swarm, a lateral ground displacement of more than ten centimetres and a small uplift of about one centimetre was recorded on neighbouring King George Island.

Challenges of research in a remote area

Cesca studied these events with colleagues from the National Institute of Oceanography and Applied Geophysics -- OGS and the University of Bologna (Italy), the Polish Academy of Sciences, Leibniz University Hannover, the German Aerospace Centre (DLR) and the University of Potsdam. The challenge was that there are few conventional seismological instruments in the remote area, namely only two seismic and two GNSS stations (ground stations of the Global Navigation Satellite System which measure ground displacement). In order to reconstruct the chronology and development of the unrest and to determine its cause, the team therefore additionally analysed data from farther seismic stations and data from InSAR satellites, which use radar interferometry to measure ground displacements. An important step was the modelling of the events with a number of geophysical methods in order to interpret the data correctly.

The researchers backdated the start of the unrest to 10 August 2020 and extend the original global seismic catalog, containing only 128 earthquakes, to more than 85,000 events. The swarm peaked with two large earthquakes on 2 October (Mw 5.9) and 6 November (Mw 6.0) 2020 before subsiding. By February 2021, seismic activity had decreased significantly.

The scientists identify a magma intrusion, the migration of a larger volume of magma, as the main cause of the swarm quake, because seismic processes alone cannot explain the observed strong surface deformation on King George Island. The presence of a volumetric magma intrusion can be confirmed independently on the basis of geodetic data.
3

Starting from its origin, seismicity first migrated upward and then laterally: deeper, clustered earthquakes are interpreted as the response to vertical magma propagation from a reservoir in the upper mantle or at the crust-mantle boundary, while shallower, crustal earthquakes extend NE-SW triggered on top of the laterally growing magma dike, which reaches a length of about 20 kilometres.

The seismicity decreased abruptly by mid November, after about three months of sustained activity, in correspondence to the occurrence of the largest earthquakes of the series, with a magnitude Mw 6.0. The end of the swarm can be explained by the loss of pressure in the magma dike, accompanying the slip of a large fault, and could mark the timing of a seafloor eruption which, however, could not yet be confirmed by other data.

By modeling GNSS and InSAR data, the scientists estimated that the volume of the Bransfield magmatic intrusion is in the range 0.26-0.56 km³. That makes this episode also the largest magmatic unrest ever geophysically monitored in Antarctica.

Simone Cesca continues: "Our study represents a new successful investigation of a seismo-volcanic unrest at a remote location on Earth, where the combined application of seismology, geodesy and remote sensing techniques are used to understand earthquake processes and magma transport in poorly instrumented areas. This is one of the few cases where we can use geophysical tools to observe intrusion of magma from the upper mantle or crust-mantle boundary into the shallow crust -- a rapid transfer of magma from the mantle to almost the surface that takes only a few days."

The above story is based on Materials provided by GFZ GeoForschungsZentrum Potsdam, Helmholtz Centre.