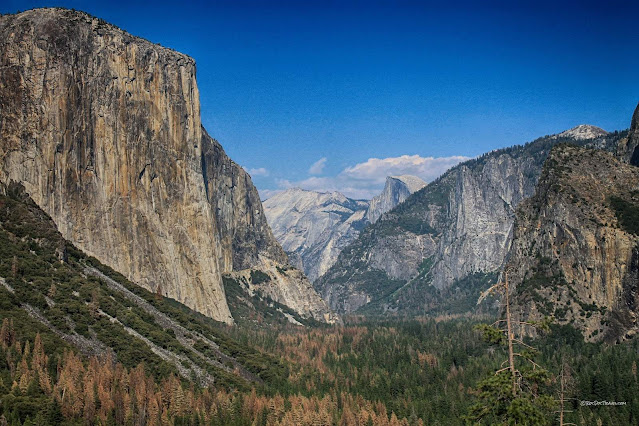 First-time visitors to Yosemite Valley gape in awe at the sheer granite wall of El Capitan and the neatly sliced face of Half Dome, aware, perhaps vaguely, that rain and glaciers must have taken a long time to cut and sculpt that landscape. But how long?

Geologists from the University of California, Berkeley, employed a novel technique of rock analysis to get a more precise answer, and concluded that much of Yosemite Valley's impressive depth was carved since 10 million years ago, and most likely even more recently -- over the past 5 million years. This shaves about 40 million years off the oldest estimates.

Rivers performed the initial carving in a preexisting shallow valley, they determined, and then both rivers and ice contributed recently.

While the scientists are unable to be more precise, the new estimate is the first to be based on an experimental study of the granite rocks in and near Yosemite, rather than on inferences based on what was going on elsewhere in the Sierra Nevada.

"Yosemite Valley is one of the most famous topographic features on the planet," said glaciologist Kurt Cuffey, UC Berkeley professor of geography and of earth and planetary science. "And of course, if you go to Yosemite Park and read the signage, they will give you numbers for when it became a deep canyon. But up until this project, every single claim about how old this valley is, when it formed a deep canyon, was just based on assumptions and speculation."

Yosemite National Park geologist Greg Stock admits that the story told about the origin of the park's iconic granite topography has been a little vague, because geologists still do not agree about what has happened since the Sierra's signature granite formed underground between about 80 and 100 million years ago, up to 10 kilometers (6 miles) under a mountain range that looked a lot different than it does today.

"We know that the Sierra was a high mountain range 100 million years ago, when the granite was forming at depth. It was a chain of volcanoes that might have looked a bit like the Andes Mountains in South America," Stock said. "The question really is whether the elevation has just been coming down through erosion since that time or whether it came down some and then was uplifted again more recently. At this point, based on studies I've done for most of my career and supported by this study, I see a lot of evidence for recent uplift happening sometime in the last 5 million years."

That uplift, which happened at the same time that earthquake faulting in the eastern Sierra Nevada created an escarpment several kilometers high, steepened the western slopes and rivers, causing them to incise valleys more quickly.

Cuffey, UC Berkeley geochemist David Shuster and their colleagues, including Stock, published the findings this week in the journal Geological Society of America Bulletin.

Shuster, a professor of earth and planetary science, developed a technique 15 years ago that he thought at the time might shed light on the origins of the valley, something that has fascinated both him and Cuffey since they first saw Yosemite as kids. Shuster, a California native, has visited it since early childhood. Cuffey, from central Pennsylvania, made his first trip to the park at the age of 15.

Much of what they remember learning is that the valley was carved by glaciers, giving short shrift to what happened before Ice Age glaciers arrived in the Pleistocene some 2.5 million years ago.

"What I learned from the signage in the valley when I was a kid wasn't quite right, given what the scientific literature said at the time. Nevertheless, the topography has been interpreted to be significantly modified by ice," Shuster said. "How to quantify that with geochronological tools, rather than just make up a story about it based on geomorphology, is one thing we were trying to do here."

"The temperature of the rock is a function of the surface lowering down into it," Shuster said. "It's very analogous to removing a down comforter -- the rock beneath it progressively gets colder. This progression through time with the rock cooling is what we get from the geochemistry and thermochronometry."

The expectation is that granite bedrock exposed on the broad uplands of the Sierra should show a long history of cool surface temperatures, since they've been exposed for tens of millions of years longer than bedrock more recently exposed on the floor of Tenaya Canyon, which feeds into Yosemite Valley from the northeast.

The experiments, conducted at the Berkeley Geochronology Center, indicated that, while rock from the uplands has been close to the surface for about 50 million years, bedrock at the bottom of Tenaya Canyon has been exposed much more recently. The temperature history of the rock obtained from the bottom of Tenaya Canyon -- from an exposed area of bedrock at the base of Half Dome -- indicates that it was more than a kilometer underground 10 million years ago, and most likely only 5 million years ago. This means that a kilometer of rock was eroded away since that time.

"This upland surface that people are familiar with from parts of the Tioga Road and Tuolumne Meadows -- that's a very old landscape," said Cuffey, who is the Martin Distinguished Chair in Ocean, Earth and Climate Science. "The question is: What about the deep canyon? Is that also very old, or is it relatively young? And what we found in our study, our big contribution, is that it's fairly young. The best guess for the timing is in the last 3 to 4 million years, but maybe as far back as 10 million years for the start of the rapid incision."

The geologists collected samples of granite bedrock from nearby highlands and the bottom of Tenaya Canyon, but not from the bedrock bottom of Yosemite Valley itself, which lies buried under about 500 meters (1/3 mile) of sediment that today forms the valley floor. But since the two formed at the same time, one can infer the timing of the formation of Yosemite Valley from the time of the scouring of Tenaya Canyon.

"The brief history of Yosemite Valley would be that there was some kind of valley in place for tens of millions of years -- a river-carved canyon associated with the ancient Sierra Nevada. And then, in the last 5 million years or so, renewed uplift of the range through westward tilting caused rivers to steepen and deepen the canyons that they were in," Stock said. "So, that probably carved out more of Yosemite Valley and may have started forming Tenaya Canyon. And then in the last 2 to 3 million years, as the climate cooled and glaciers came down through Tenaya Canyon and into Yosemite Valley, they further sculpted the rock, deepening those valleys. And in the case of Yosemite Valley, widening it out considerably. So, there's some component of an old Yosemite Valley. But I think this recent work shows that much more of that topography is younger, rather than older."

Stock, who has held the position of park geologist for 17 years and is the park's first geologist, said the new study will revise how the park tells the geological history of Yosemite Valley.

"The timing of this new study is perfect in the sense that, over the next several years, we're hoping to completely redo the Geology Hut displays at Glacier Point. I'm very excited to include these new results in those displays," he said. "It's a perfect place to tell that story, because there's a view straight up Tenaya Canyon."

The above post is reprinted from materials provided by University of California – Berkeley. Original written by Robert Sanders.