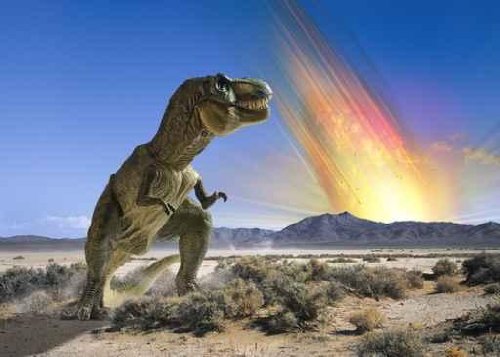 The dinosaurs, along with the majority of all other animal species on Earth, went extinct approximately 65 million years ago. Some scientists have said that the impact of a large meteorite in the Yucatan Peninsula, in what is today Mexico, caused the mass extinction, while others argue that there must have been additional meteorite impacts or other stresses around the same time. A new study provides compelling evidence that "one and only one impact" caused the mass extinction, according to a University of Missouri-Columbia researcher.

"The samples we found strongly support the single impact hypothesis," said Ken MacLeod, associate professor of geological sciences at MU and lead investigator of the study. "Our samples come from very complete, expanded sections without deposits related to large, direct effects of the impact - for example, landslides - that can shuffle the record, so we can resolve the sequence of events well. What we see is a unique layer composed of impact-related material precisely at the level of the disappearance of many species of marine plankton that were contemporaries of the youngest dinosaurs. We do not find any sedimentological or geochemical evidence for additional impacts above or below this level, as proposed in multiple impact scenarios."

MacLeod and his co-investigators studied sediment recovered from the Demerara Rise in the Atlantic Ocean northeast of South America, about 4,500 km (approximately 2,800 miles) from the impact site on the Yucatan Peninsula. Sites closer to and farther from the impact site have been studied, but few intermediary sites such as this have been explored. Interpretation of samples from locations close to the crater are complicated by factors such as waves, earthquakes and landslides that likely followed the impact and would have reworked the sediment. Samples from farther away received little impact debris and often don't demonstrably contain a complete record of the mass extinction interval. The Demerara Rise samples, thus, provide an unusually clear picture of the events at the time of the mass extinction.

"With our samples, there just aren't many complications to confuse interpretation. You could say that you're looking at textbook quality samples, and the textbook could be used for an introductory class," MacLeod said. "It's remarkable the degree to which our samples follow predictions given a mass extinction caused by a single impact. Sedimentological and paleontological complexities are minor, the right aged-material is present, and there is no support for multiple impacts or other stresses leading up to or following the deposition of material from the impact."

The impact of a meteorite on the Yucatan Peninsula likely caused massive earthquakes and tsunamis. Dust from the impact entered the atmosphere and blocked sunlight, causing plants to die and animals to lose important sources of food. Temperatures probably cooled significantly around the globe before warming in the following centuries, wildfires on an unprecedented scale may have burned and acid rain might have poured down. MacLeod and many other scientists believe that these effects led to the relatively rapid extinction of most species on the planet. Some other scientists have argued that a single impact could not have caused the changes observed and say that the impact in the Yucatan predates the mass extinction by 300,000 years.

MacLeod's co-investigators were Donna L. Whitney from the University of Minnesota, Brian T. Huber from the Smithsonian National Museum of Natural History and Christian Koeberl of the University of Vienna. The study was recently published in the 'in press' section of the online version of the Geological Society of America Bulletin. Funding was provided by the U.S. Science Support Program, the U.S. National Science Foundation and the Austrian Science Foundation. Samples were recovered on Leg 207 of the Ocean Drilling Program.
Share to: