The Sedimentary Rock Textures Chart on the following  illustrates the major sedimentary rock textures. Below, we define a few of the terms geologists use to describe  these textures.

♦ Clastic texture: grains or clasts do not interlock but rather are piled together and cemented. Boundaries of individual grains may be another grain, cement or empty pore space. Overall rock is generally porous and not very dense. Because clasts are only cemented together, grains are relatively easy to “scrape off" using a rock hammer point or metal nail. If the grains are visible, all of the above characteristics may be noted.

♦ Microclastic texture: This texture is the same as the clastic texture except that the clasts are not visible to the eye. Because the grains are invisible, examining the ease in which grains (silt or clay) may be knocked off is the best test to perform.

♦ Microcrystalline texture: no crystals are visible but the rock is composed of interlocking microscopic crystals. Such rocks are dense and typically nonporous. Microcrystalline rocks break with a characteristic conchoidal fracture. That is, the broken surface may smooth concentric lines resembling the inside of an oyster shell or broken glass.

♦ Fossiliferous texture: Rocks containing an abundance of fossils. The matrix may be eithe crystalline, microcrystalline, or clastic (micro)clastic.

The first step in the classification of sedimentary rocks is to determine whether it is clastic or chemical so that you can then determine which of the charts in Figure you should be using. This distinction is based primarily on texture. First determine if the rock has a (micro)clastic or (micro)crystalline texture. If the texture is (micro) crystalline, you are dealing with a chemical rock. If the texture is (micro) clastic, you must determine whether the rock is clastic or bioclastic. If clastic, use the clastic rock chart. From this point, the following description of sedimentary rocks should guide you to the appropriate rock name. 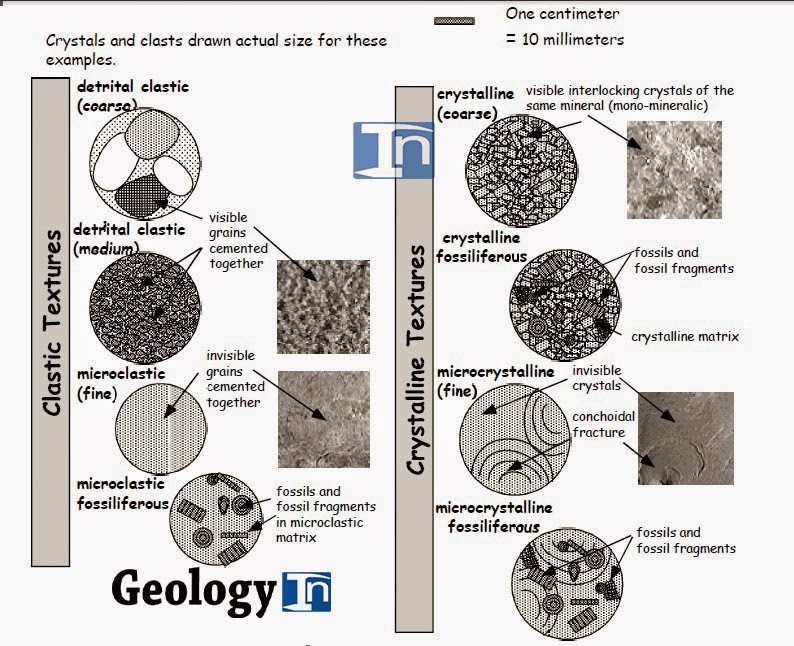 Clastic rocks form by the lithification of clastic material transported and deposited as solid clasts. Clastic rocks are classified and named according to texture (clast size, sorting and rounding), and mineral composition. An important characteristic of the clastic sedimentary rocks, however, is that all have clastic textures. That is, the grains are not interlocking- they are held together as an aggregate by a cement. Once you have determined that the rock is made of clasts, or pieces, you will use the size difference to further refine your rock description. The table below gives the various terms for clastic particles and their sizes. Coarse-grained clastic rocks are either sedimentary breccias or conglomerates. Medium grained clastic rocks are sandstones. Fine and  fine-grained rocks are mudstones and shales.

If feldspars (a pinkish-white color and relatively rectangular clasts) are visible then the rock is an arkose; arkose also commonly has a red hematite cement. If there are substantial clay or dark-colored rock fragments visible, the sandstone is a graywacke. We can describe the very fine-grained (microclastic) rocks on the basis of another texture. If the rock is fissile, that is, if it breaks into little plates or thin sheets, we call it shale. If the rock breaks into more massive "blobs" then we use the term "mudstone".