A Diamond Bigger than Earth Discovered in Constellation Centaurus 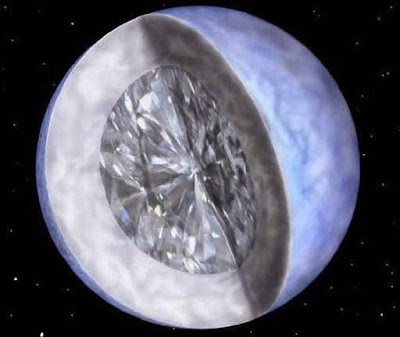 Like an episode out of the Hitchhiker's Guide to the Galaxy, The Harvard-Smithsonian Center for Astrophysics has announced the discovery of a mass of crystallized carbon formerly known as star BPM 37093, now known as the biggest diamond in the galaxy, fifty light years away from Earth in the constellation Centaurus.
The star, named "Lucy" after the Beatles song, "Lucy in the Sky with Diamonds," is estimated to be 2,500 miles across and weighs approximately 10 billion-trillion-trillion-carats – a one, followed by 34 zeros. Travis Metcalfe, an astronomer from the Harvard-Smithsonian Center for Astrophysics and leader of the team who discovered the gem, says “You would need a jeweler’s loupe the size of the sun to grade this diamond. Bill Gates and Donald Trump together couldn’t begin to afford it.”
The diamond is actually the crystallized interior of a white dwarf – or the hot core of a star that is left over after the star uses up its nuclear fuel and dies. It is made mostly of carbon and is coated by a thin layer of hydrogen and helium gases.
Five billion years from now, our sun will die and become a white dwarf. Approximately two billion years after that, its ember core will crystallize as well, leaving a giant diamond in the center of our solar system. A paper announcing this discovery has been submitted to The Astrophysical Journal Letters for publication. The Harvard-Smithsonian Center for Astrophysics is a joint collaboration between the Smithsonian Astrophysical Observatory and the Harvard College Observatory. Scientists within the organization are classified into six research divisions where they study the origin, evolution and ultimate fate of the universe.
Posted by Casey Kazan
Share to: