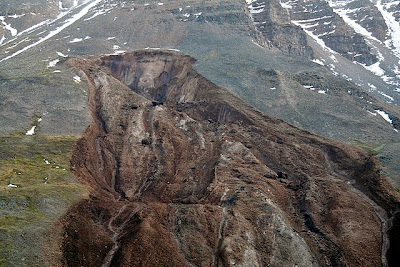 Large landslides are an important process of erosion in the Himalaya-Karakoram ranges (HKR). These high-relief landscapes are characterized by steep slopes that are prone to frequent landsliding. By mapping nearly 500 large (greater than 0.1 km2) landslides in the HKR, Jan Henrik Blöthe and colleagues find that the vast majority of these mass movements lie in the lower portions of the landscape, whereas glaciers and rock glaciers occupy the higher elevations almost exclusively.


These findings suggest that different processes dominate the gross erosion in the HKR at different elevations: Large landslides appear to preferentially undermine the topography in response to incision along major rivers, whereas glacial erosion and/or more frequent and smaller slope failures, associated with intense frost action, compensate for this role at higher elevations.

In this study published in Geology, Blöthe and colleagues introduce a new method that they term excess topography (ZE) to identify the location of potentially unstable rock-mass volumes. They find that locations with high values of ZE are concentrated near or below the median elevation, which is also where the majority of the mapped landslides occur, and conclude that the HKR are characterized by two vertical domains of landslide and (peri-) glacial erosion that may respond to different time scales of perturbation.

Provided by Geological Society of America