Nearly half of americans exposed to potentially damaging earthquakes

Earhquakes, News 9:44 PM
A+ A-
Print Email
More than 143 million Americans living in the 48 contiguous states are exposed to potentially damaging ground shaking from earthquakes. When the people living in the earthquake-prone areas of Alaska, Hawaii and U.S. territories are added, this number rises to nearly half of all Americans.

Scientists with the USGS published this research online today in the journal Earthquake Spectra.

"The new exposure estimate is nearly double the previous 2006 estimate of 75 million Americans in 39 states, and is attributed to both population growth and advances in science," said William Leith, who is the USGS senior science advisor for earthquake and geologic hazards and a co-author of this study. "Populations have grown significantly in areas prone to earthquakes, and USGS scientists have improved data and methodologies that allow for more accurate estimates of earthquake hazards and ground shaking."

The USGS shaking calculations consider the chance of an earthquake occurring in a 50-year time frame, as that is the typical lifetime of a building. This time frame is thought to be reasonable for life-safety considerations when designing buildings and other structures.

Which states have the strongest shaking potential?
When one considers very strong ground shaking levels, the 10 states with the highest populations exposed (in descending order) are California, Washington, Utah, Tennessee, Oregon, South Carolina, Nevada, Arkansas, Missouri and Illinois. Although this level of shaking is estimated to occur relatively infrequently, it could cause significant damage and causalities. The difference between those areas at risk from moderate versus strong shaking depends on a variety of factors, including the location of fault lines and the seismicity rates of the area.

Start with science
These new estimates are derived from the recently updated U.S. National Seismic Hazard Maps, which identify where future earthquakes will occur, how often they will occur, and how strongly the ground will likely shake as a result. Researchers analyzed high-resolution population data and infrastructure data to determine populations exposed to specific levels of earthquake hazard. The population data are from LandScan, and the infrastructure data are from the Homeland Security Infrastructure Program (HSIP) database.


"This new research helps us better understand the scale of earthquake hazards and ultimately strengthen the nation's ability to protect Americans against future events," said Kishor Jaiswal, a USGS research structural engineer as well as the lead author of the study. "Of particular concern is the significant amount of critical infrastructure located in high earthquake-hazard areas, ranging from private and public schools to health care facilities and fire stations. The USGS is dedicated to continuously updating research on population and infrastructure exposure as communities change and new science is available on earthquake behavior." 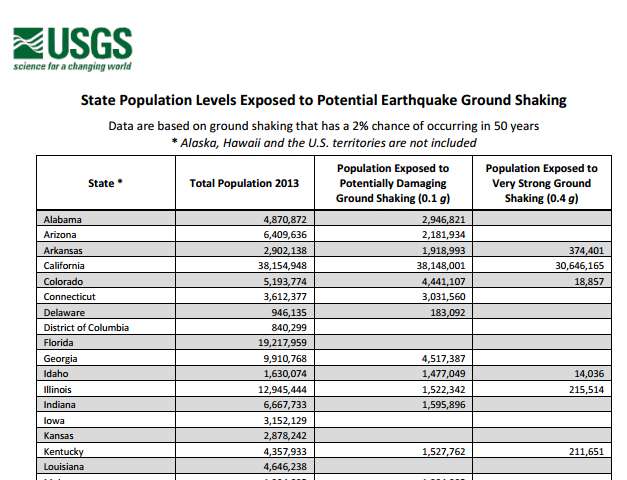 Additional details
Earthquakes due to human activity—or induced seismicity—were not accounted for in these estimations. USGS scientists are currently researching ways to understand potential ground shaking from induced earthquakes and incorporate that knowledge in U.S. National Seismic Hazard Maps.

Similarly, the amplification of ground shaking due to different soil types was not considered, which could lead to a further increase in the number of people exposed to stronger shaking.