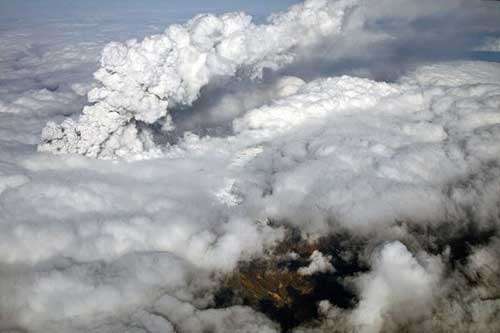 A pair of researchers with MIT has found a way to set a time line for volcanic activity in what is now Siberia, over 250 million years ago, and the worst mass extinction that ever occurred on our planet. In their paper published in the journal Science Advances, Seth Burgess and Samuel Bowring describe how they were able to precisely date both the volcanic activity and the mass extinction that occurred, tying the two events together.


Scientists have known for quite some time that a mass extinction occurred at the end of the Permian period, causing the extinction of approximately 90 percent of all marine species, and 75 percent of land dwellers. They also knew that some massive volcanic activity had occurred in what is now Siberia, perhaps during roughly the same time period. Because of this, there were suggestions that the eruptions had caused the extinctions, but until now, no one had been able to time either event precisely enough to show that was what really happened.

To obtain such precise measurements, the two researchers used radioactive dating techniques on hundreds of samples scattered across approximately 2.5 million square kilometers of land, noting the differences in crystals that would have come from material that was explosively ejected versus others that were likely part of voluminous magna (approximately 3 million cubic meters) that also came from the volcanoes. Ratios of uranium to lead in the crystals allowed for creating a timeline. Their analysis indicated that the period of volcanic activity began approximately 300,000 years before the start of the mass extinction and then continued on for another half million years. This suggests that the mass extinction was indeed caused by the eruptions—high levels of carbon dioxide and other gases would have been spewed into the atmosphere, causing very serious climate change, including acidification of the oceans—making life very difficult for all living things on the planet.

Still unexplained, however, is why the planet took so long to make a comeback—prior research has shown it took between five and ten million years for the Earth's climate to return to a state that was capable of hosting a more diverse ecosystem.