Meteorite Identification: How to Identify Meteorites in 7 Steps

Have an interesting rock in your possession and want to see if it’s out of this world?

A meteorite is a solid piece of debris from an object, such as a comet, asteroid, or meteoroid, that originates in outer space and survives its passage through the Earth's atmosphere and impact with the Earth's surface or that of another planet.

When the object enters the atmosphere, various factors like friction, pressure, and chemical interactions with the atmospheric gases cause it to heat up and radiate that energy. It then becomes a meteor and forms a fireball, also known as a shooting star or falling star; astronomers call the brightest examples "bolides." Meteorites that survive atmospheric entry and impact vary greatly in size. For geologists, a bolide is a meteorite large enough to create a crater.

Most meteoroids disintegrate when entering the Earth's atmosphere. Usually, five to ten a year are observed to fall and are subsequently recovered and made known to scientists. Few meteorites are large enough to create large impact craters. Instead, they typically arrive at the surface at their terminal velocity and, at most, create a small pit. 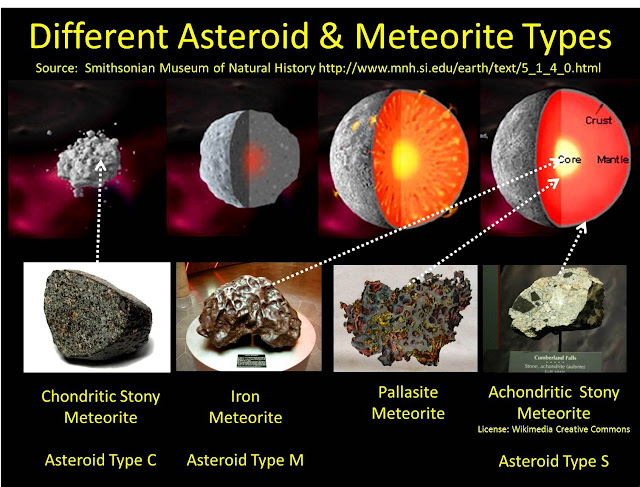 Below you will find descriptions of seven different tests you can do to determine if the rock in question is a meteorite.

1. Metal
Most meteorites contain at least some metal. Do you see the metal shining on a broken surface? If so, you might have a meteorite.

2. Density
Density - Those meteorites that do have a lot of metal tend to be very dense compared to regular rocks. Do you have something very dense such that it could be a meteorite? But remember that not all meteorites are dense.

3. Magnetic Properties
Magnetic Properties - A lot of meteorites contain shiny iron-nickel metal grains or consist largely of iron-nickel metal. The iron in the metal attracts a magnet. Is a magnet attracted to the surface of your sample? If so, you might have a meteorite. But remember that a lot of normal rocks on the Earth are also magnetic. So, just because something is magnetic, it doesn't mean that it is a meteorite.

5. Fusion crust
When a meteorite is falling through the atmosphere, it begins to heat up because of the extreme compression of the atmosphere. The meteor gets so hot that the outer surface begins to melt, which produces a thin black/brown coating on the surface of the rock called a fusion crust. Iron meteorites may show evidence of melted metal on their surface, but this is less common. Fusion crusts are present on freshly fallen meteorites, but the crusts are fragile and can weather away from samples that fell a long time ago. Small patches of fusion crust can sometimes remain in hollows of the sample. Does your sample have a fusion crust? If so, you have a meteorite.

6. Regmaglypt texture/thumbprints
When the surface of the meteorite begins to melt during entry into the atmosphere, some areas of the meteorites are eroded by the melting more than others, almost like someone is taking little scoops of material out. This leaves a bunch of small dents in the surface of the rock, making it look like someone put thumbprints into clay. The surface of most meteorite samples have these thumbprints called “regmaglypts,” which can vary in size from less than a centimeter up to as much as 10 centimeters. Does your sample have Regmaglypt texture/thumbprints? If so, you have a meteorite.

7. Streak
Most meteorites won’t leave a streak, but the surfaces of some meteorites might leave a reddish streak if they have been oxidized (rusted). If you drag your sample across this “streak plate,” and it leaves a red/orange line, then the sample is probably a common mineral on the Earth called hematite. If the sample is magnetic and leaves a black or gray streak, then it might be the common terrestrial iron-oxide mineral called magnetite. Does your sample cause a streak on a “streak plate?” If not, you may have a meteorite.


The Largest Meteorite Ever Found in the United States

The above story is based on Materials provided by NASA’s Dawn Mission.
Share to: