Tsunami Warning for Us West Coast After Magnitude-7.9 Earthquake Off Alaska 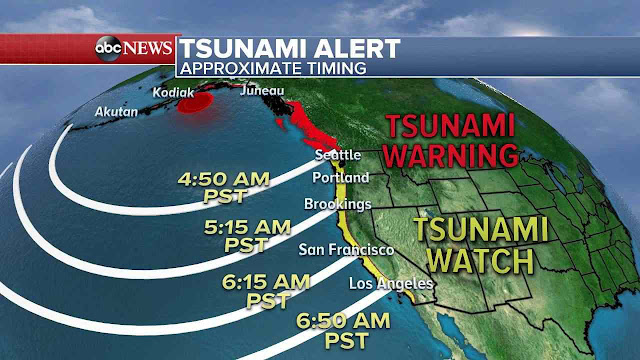 A magnitude-7.9 earthquake detected in the Gulf of Alaska has triggered tsunami warnings in Alaska and tsunami watches across several Western states.


A tsunami watch has also been cancelled for British Columbia, Canada.
The watch was cancelled earlier for the US states of Washington, Oregon and California.
The advisory remains in place for southern Alaska, according to reports.

A tsunami warning is in effect for southeast and south Alaska, including the Alaska Peninsula and Aleutian Islands, as well as British Columbia in Canada. A tsunami watch is in effect for California, Oregon and Washington, according to the Tsunami Warning Center.

As of 2:29 a.m. (6:29 a.m. ET), water in the harbor near Kodiak was receding, the city's police department tweeted, after earlier urging residents to get at least 100 feet above sea level.

"Citizens should remain in place and wait for further updates," Kodiak police said.

Receding water can be a dangerous precursor to a significant tsunami, CNN meteorologist Dave Hennen said.

"Think of a sloshing bathtub with a water level dropping, only to rise extremely quickly," he said. "The tsunami would come in waves. In some occasions, the first wave is not the largest."

The earthquake struck about 175 miles southeast of Kodiak, Alaska, shortly after midnight Alaska local time, according to preliminary figures from the United States Geological Survey. The quake had a depth of about 15 miles, according to the USGS. Previously, the earthquake had been measured at magnitude 8.2.
Share to: