The Different Types and Colors of Topaz 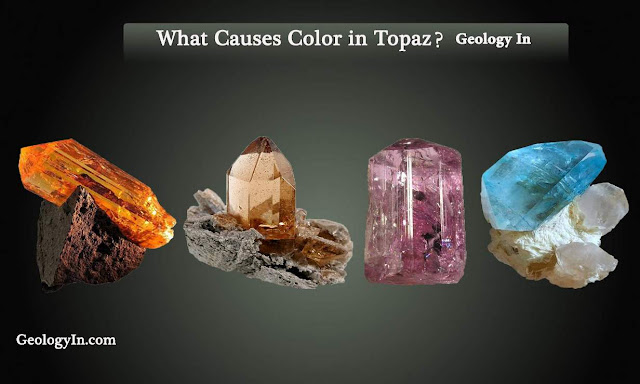 Topaz is a silicate mineral of aluminium and fluorine with the chemical formula Al2SiO4(F, OH)2. Topaz crystallizes in the orthorhombic system, and its crystals are mostly prismatic terminated by pyramidal and other faces.

Topaz is usually colorless in the absence of impurities. It is one of the hardest naturally occurring minerals (Mohs hardness of 8) and is the hardest of any silicate mineral.

The common impurity found in topaz is iron, but iron does not impart any color directly to topaz as chromium impurities do in rubies, which impart the red color. In rubies the chromium atoms are excited directly by absorbing visible photons of light.

The chromium atoms that jump to an excited state emit light in the red region of the visible spectrum when they return to their ground states. In the case of topaz the iron atoms create another unstable species in the crystal, and this new species jumps to an excited state by absorbing a visible photon of light, which emits light from different regions of the spectrum depending on their wave length, when they return to the ground state, giving rise to the variety of colors found in topaz, including the golden yellow or golden brown color of the “American Golden Topaz.” The unstable species created by the iron atoms are known as “Color Centers.”

Naturally colored topaz such as yellow, orange and brown topaz contain color centers that are stable to light. If a colorless topaz is irradiated by ultraviolet light, x-rays, gamma rays or high energy electrons, we can obtain a yellow, orange or brown color, but this color is usually unstable and fades in a few days in light.

However blue topaz produced by irradiation produces color centers which are stable like the color centers of natural blue topaz, and therefore does not fade in light. These color centers can only be destroyed by heating, when the topaz becomes colorless again.


See also:
A Gemstone That Looks Like Deconstructed Chocolate Bars
Moonstone Vs Opal — What's the Difference?
What is Fire Agate?