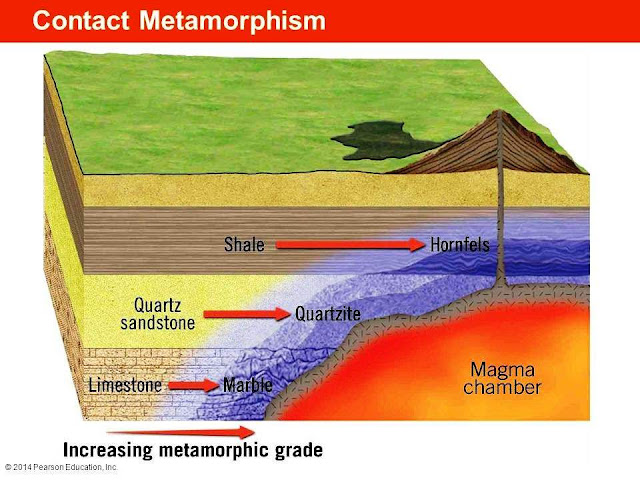 The changes that occur are greatest wherever the magma comes into contact with the rock because the temperatures are highest at this boundary and decrease with distance from it. Around the igneous rock that forms from the cooling magma is a metamorphosed zone called a contact metamorphism aureole.

Aureoles may show all degrees of metamorphism from the contact area to unmetamorphosed (unchanged) country rock some distance away. The formation of important ore minerals may occur by the process of metasomatism at or near the contact zone. 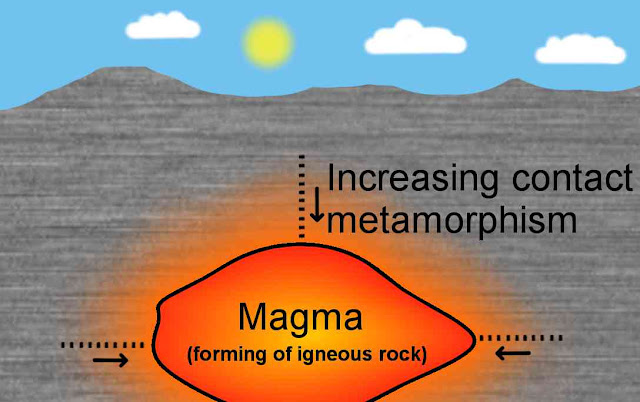 When a rock is contact altered by an igneous intrusion it very frequently becomes more indurated, and more coarsely crystalline. Many altered rocks of this type were formerly called hornstones, and the term hornfels is often used by geologists to signify those fine grained, compact, non-foliated products of contact metamorphism.

A shale may become a dark argillaceous hornfels, full of tiny plates of brownish biotite; a marl or impure limestone may change to a grey, yellow or greenish lime-silicate-hornfels or siliceous marble, tough and splintery, with abundant augite, garnet, wollastonite and other minerals in which calcite is an important component.

A diabase or andesite may become a diabase hornfels or andesite hornfels with development of new hornblende and biotite and a partial recrystallization of the original feldspar. Chert or flint may become a finely crystalline quartz rock; sandstones lose their clastic structure and are converted into a mosaic of small close-fitting grains of quartz in a metamorphic rock called quartzite.

If the rock was originally banded or foliated (as, for example, a laminated sandstone or a foliated calc-schist) this character may not be obliterated, and a banded hornfels is the product; fossils even may have their shapes preserved, though entirely recrystallized, and in many contact-altered lavas the vesicles are still visible, though their contents have usually entered into new combinations to form minerals that were not originally present.

The minute structures, however, disappear, often completely, if the thermal alteration is very profound. Thus small grains of quartz in a shale are lost or blend with the surrounding particles of clay, and the fine ground-mass of lavas is entirely reconstructed.

If the intruded rock is rich in carbonate the result is a skarn. Fluorine-rich magmatic waters which leave a cooling granite may often form greisens within and adjacent to the contact of the granite. Metasomatic altered aureoles can localize the deposition of metallic ore minerals and thus are of economic interest.

A special type of contact metamorphism, associated with fossil fuel fires, is known as pyrometamorphism.