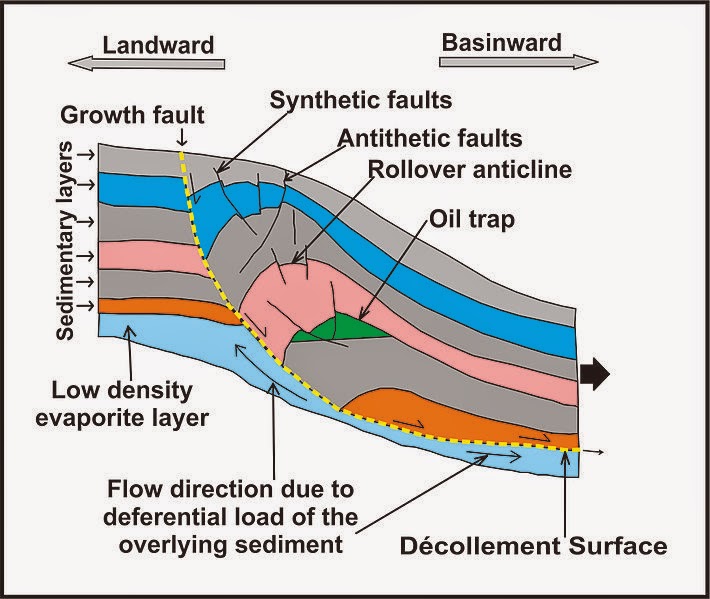 Growth faults are syndepositional or syn-sedimentary extensional faults that initiate and evolve at the margins of continental plates. They extend parallel to passive margins that have high sediment supply.Their fault plane dips mostly toward the basin and has long-term continuous displacement. Figure one shows a growth fault with a concave upward fault plane that has high updip angle and flattened at its base into zone of detachment or décollement. This angle is continuously changing from nearly vertical in the updip area to nearly horizontal in the downdip area.
Sedimentary layers have different geometry and thickness across the fault. The footwall – landward of the fault plane – has undisturbed sedimentary strata that dip gently toward the basin while the hanging wall – on the basin side of the fault plane – has folded and faulted sedimentary strata that dip landward close to the fault and basinward away from it.These layers perch on a low density evaporite or over-pressured shale bed that easily flows away from higher pressure into lower pressure zones.Most studies since the 1990s concentrate on the growth faults' driving forces, kinematics and accompanied structures since they are helpful in fossil fuel explorations as they form structural traps for oil. 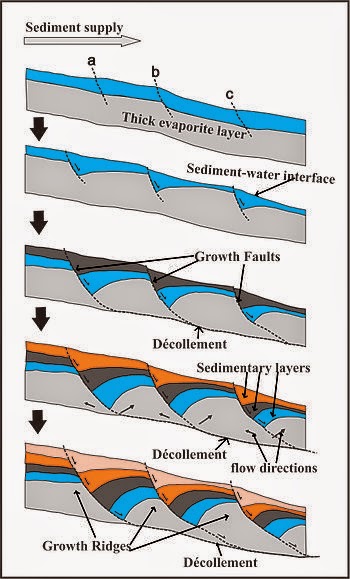 Consequently, the passive margin experience unequal subsidence across the continental shelf. Both the new-created accommodation spaces and the thickness of the new-deposited sedimentary layers are greater above the sinking zones than above the growth ridges. The new added layers are thicker within the footwall than within the hanging wall (fig. 2). These variations result in an increasing of differential load intensities - unequal distribution of sediments load - across the shelf with time as more sediment layers are added(fig. 2). Therefore, the rate by which the pressure increases upon the evaporite layer below the sinking zone are much more than the rate of pressure increase upon the same evaporite layer at the growth ridges. So, the flow rate within the evaporite layer is progressively increasing as deferential load intensifies(fig. 2). The growth ridges end up with salt diapir when the sinking zone sequences weld to the base of the evaporite layer.
Share to: