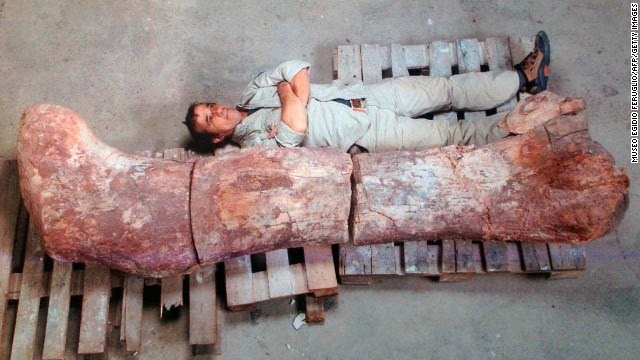 As heavy as 14 elephants, as long as 2 tractor trailers: Meet Mr. Titanosaur

They may be the biggest boys on any block -- any block, ever.
In fact, the dinosaurs unveiled Saturday by Argentina's Museo Paleontologico Egidio Feruglio may be the largest to grace the Earth. At about 130 feet (40 meters) long and 180,000 pounds (80,000 kilograms), it's no wonder, then, that these colossal creatures are dubbed titanosaurs -- titan being a nod to the giants of ancient Greek mythology.
"It's like two trucks with a trailer each, one in front of the other, and the weight of 14 elephants together," said Jose Luis Carballido, a dinosaur specialist at the Argentinian museum who played a big part in the discovery.
And, like your mother might have told you, these dinosaurs grew big and strong eating their vegetables.
These herbivores dated back to about 95 million years ago, in the late Mesozoic Era. In 2011, scientists exploring a remote swath of Argentina's Patagonia some 160 miles (260 kilometers) from the city of Trelew came across a site with 200 fossils -- a find that the museum characterized as "a dinosaur cemetery."
Giant fossilized dinosaur discovered Scientists discover 'chicken from hell' Could this be the cousin of T-Rex? 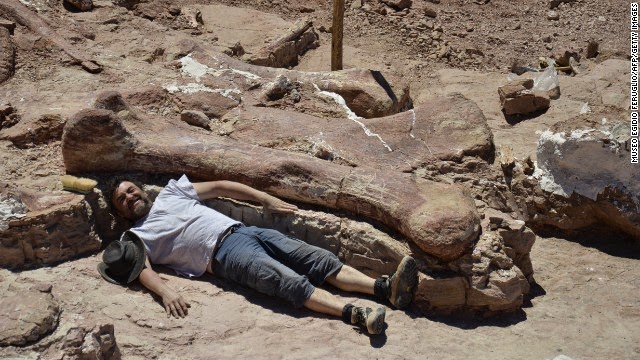 According to a news release from the museum, these experts were able to piece together seven specimens of titanosaurs out of this. The belief is that they died together there, perhaps from dehydration or being stuck in the mud.
The discovery of more than 60 teeth from large carnivore dinosaurs (albeit no bones of carnivores) suggests what happened next: the titannosaur remains were eaten up.
"Probably, they went to (eat) the herbivores' dead bodies," said Carballido. "But the feast came at a price: The carnivores would lose many of their teeth as they attempted to bite the hard skin and flesh." 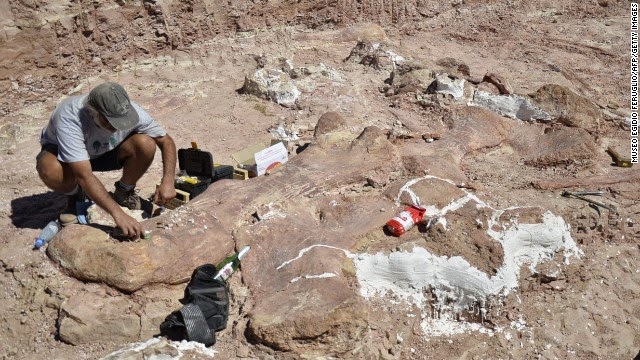