Types of Twinning in Minerals

A twin boundary or composition surface separates the two crystals. Crystallographers classify twinned crystals by a number of twin laws. These twin laws are specific to the crystal system. The type of twinning can be a diagnostic tool in mineral identification.

Twinning can often be a problem in X-ray crystallography, as a twinned crystal does not produce a simple diffraction pattern.

Merohedral twinning occurs when the lattices of the contact twins superimpose in three dimensions, such as by relative rotation of one twin from the other. An example is metazeunerite. In penetration twins the individual crystals have the appearance of passing through each other in a symmetrical manner. Orthoclase, staurolite, pyrite, and fluorite often show penetration twinning.

Galvanized surface with macroscopic crystalline features. Twin boundaries are visible as striations within each crystallite, most prominently in the bottom-left and top-right.
If several twin crystal parts are aligned by the same twin law they are referred to as multiple or repeated twins. 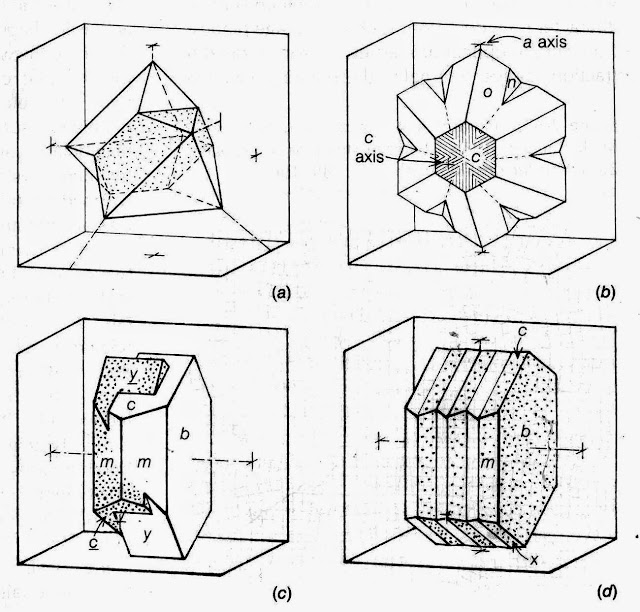 Twinned crystals (e.g., see Figure ) may be described as follows:

If a FCC metal like aluminum experiences extreme stresses, it will experience twinning as seen in the case of explosions. Deformation twinning is a common result of regional metamorphism.

Crystals that grow adjacent to each other may be aligned to resemble twinning. This parallel growth simply reduces system energy and is not twinning.

How Do Asterism Minerals Form?
Types of agate with photos
Interesting Facts about Rhodochrosite with Amazing Photos