Epithermal Systems: The Association of Gold Mineralization With Volcanic 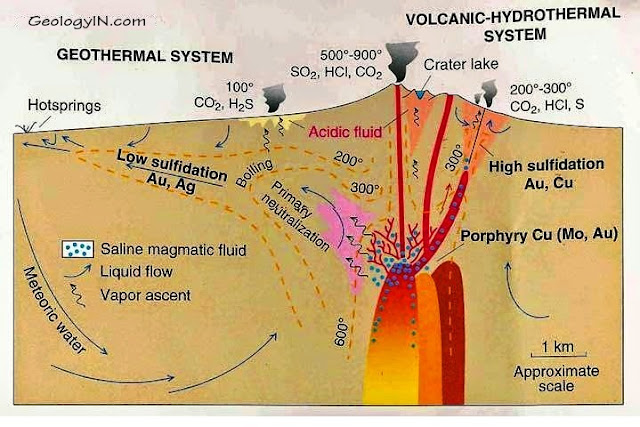 The association of gold mineralization with volcanic and geothermal hot spring activity has long been recognized by prospectors and geologists. We now know that this association is a consequence of the hot magmas which not only produce volcanic eruptions and volcanic rocks but also are the source of the hot fluids that transport gold and other metals and may in fact be the source of gold itself.

Fluids emanating from a molten magma are extremely hot and under high pressure deep below the surface. As these fluids rise, they mix with surface waters and change the composition of the rocks with which they come into contact. This process is known as alteration.

Eventually the fluids breach the surface and form either acidic lakes known as fumaroles common in the craters of volcanoes or dilute, neutral hot springs like those at Yellowstone or the Geysers in California.

In both subtypes gold will largely be precipitated from 2.5 kilometers depth to surface.
Recognizing that gold precipitates near the surface in these systems, the great American geologist Waldemar Lindgren coined the term epithermal in 1933, epi meaning shallow and thermal referring to the heated fluid.

Low and high do not refer to each type’s relative amount of sulphide minerals (metal complexes of sulfur with metals). Rather the distinction is based on the different sulfur to metal ratio within the sulphide minerals of each subtype.

While this discussion deals with high-sulphidation epithermal systems, it is worth mentioning that low-sulphidation systems also form economic gold deposits although they develop under vastly different chemical conditions.