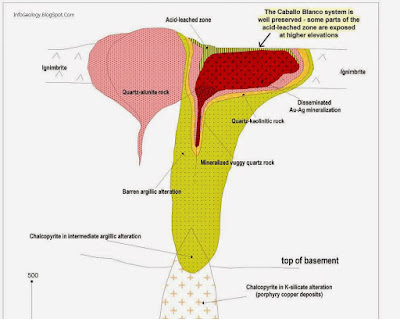 High-sulphidation deposits result from fluids (dominantly gases such as SO2, HF, HCl) channeled directly from a hot magma. The fluids interact with groundwater and form strong acids. These acids rot and dissolve the surrounding rock leaving only silica behind, often in a sponge-like formation known as vuggy silica. Gold and sometimes copper-rich brines that also ascend from the magma then precipitate their metals within the spongy vuggy silica bodies. The shape of these mineral deposits is generally determined by the distribution of vuggy silica. Sometimes the vuggy silica can be widespread if the acid fluids encountered a broad permeable geologic unit. In this case it is common to find large bulk-tonnage mines with lower grades.

Typically the sequence is to move from vuggy silica (the centre of the fault) progressing through quartz-alunite to kaolinite-dickite, illite rich rock, to chlorite rich rock at the outer reaches of alteration. Alunite (a sulphate mineral) and kalonite, dickite, illite and chlorite (clay minerals) are generally whitish to yellowish in colour. The clay and sulphate alteration (referred to as acid-sulphate alteration) in high-sulphidation systems can leave huge areas, sometimes up to 100 square kilometers of visually impressive coloured rocks.

neutralized and the silica dissolves. The silica is later precipitated in the veins as quartz, often sealing the fissure closed. When this occurs, the pressure of the gases underneath the sealed fault builds until the seal is ruptured, which provokes catastrophic boiling and the precipitation of gold.

After this explosive boiling event, passive conditions return, and quartz precipitates once again. This cyclical process results in the well-known banded texture of the quartz-adularia veins typical of low-sulphidation vein systems. Quartz-adularia veins can contain high-grade gold (greater than one ounce gold per ton) and silver deposits, over vertical intervals of generally 300 to 600 metres. Within this vertical dimension, high gold grades can make for a large amount of easy to mine gold in a narrow compact area. 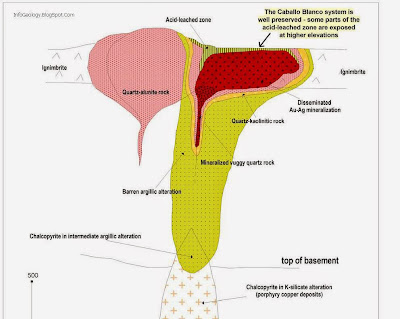