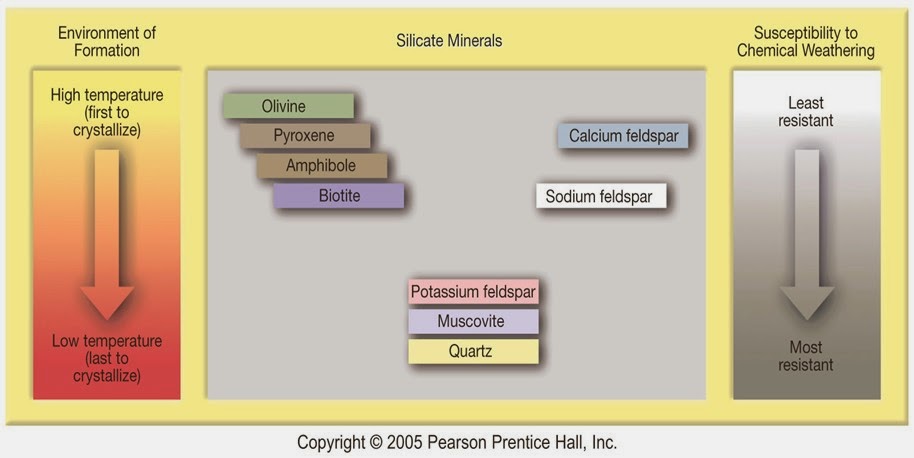 In general, minerals are most stable at the temperature and pressure at which they form. In the case of the igneous rock minerals described in Bowen's Reaction Series, the higher temperature minerals (such as olivine, pyroxene, etc.), when exposed at the surface, will be farthest from their comfort zone, and will therefore chemically weather at a faster rate.

Quartz, at the other end of Bowen's, is closer to its preferred temperature and should therefore be more stable (and it is). This is one reason why we find quartz sand at the beach, instead of olivine sand.

The weird thing that Bowen found concerned the discontinuous branch. At a certain temperature a magma might produce olivine, but if that same magma was allowed to cool further, the olivine would "react" with the residual magma, and change to the next mineral on the series (in this case pyroxene).

Continue cooling and the pyroxene would convert to amphibole, and then to biotite. Mighty strange stuff, but if you consider that most silicate minerals are made from slightly different proportions of the same 8 elements, all we're really doing here is adjusting the internal crystalline lattice to achieve stability at different temperatures. Really no big deal.

The low melting points of minerals at the bottom of Bowen's Reaction Series means that at surface temperatures and pressures on Earth, they are closer to their normal fields of stability. Quartz, in fact, is completely stable at 20°C (68°F). Olivine, however, is not, and given the presence of water it will weather (break down) relatively rapidly. As a result, it is rare to find olivine in sediments or sedimentary rocks. Clays and iron oxides and hydroxides (e.g., hematite, limonite) are the weathering products of iron-rich silicate minerals, and are the mineral forms that are stable at low temperatures and pressures.

Thus, the lower minerals are in Bowen's Reaction Series, the more resistant they are to chemical weathering: this means that the rate at which they weather is slower than for minerals higher in the series. Quartz is subject only to dissolution, and in rare instances muscovite can actually form in soils as a weathering product from other minerals. All the other minerals in Bowen's Reaction Series, however, continually weather in the geologic environment, to forms that are more stable at the low temperatures and pressures of the Earth's surface, such as clays or iron and aluminum oxides and hydroxides (e.g., hematite, limonite, bauxite).