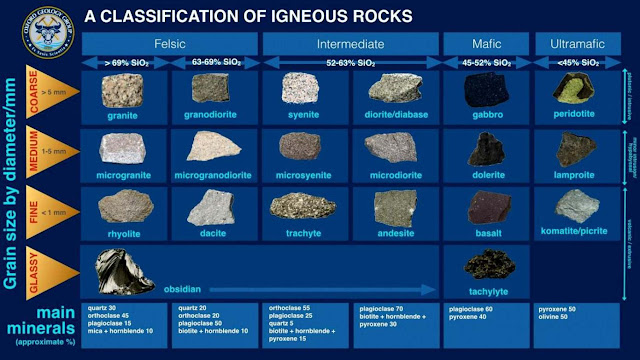 Early in the days of geology there were few rocks described and classified.  In those days each new rock described by a geologist could have shown characteristics different than the rocks that had already been described, so there was a tendency to give the new and different rock a new name.

Because such factors as cooling conditions, chemical composition of the original magma, and weathering effects, there is a potential to see an infinite variety of igneous rocks, and thus a classification scheme based solely on the description of the rock would eventually lead to a plethora of rock names.

Still, because of the history of the science, many of these rock names are firmly entrenched in the literature, so the student must be aware of all of these names, or at least know where to look to find out what the various rocks names mean.

Minerals Present in the Rock

The minerals present in a rock and their relative proportions in the rock depend largely on the chemical composition of the magma.  This works well as a classification scheme if all of the minerals that could potentially crystallize from the magma have done so - usually the case for slowly cooled plutonic igneous rocks.  But, volcanic rocks usually have their crystallization interrupted by eruption and rapid cooling on the surface.  In such rocks, there is often glass or the minerals are too small to be readily identified.  Thus a system of classification based solely on the minerals present can only be used.

We can easily the inadequacy of a mineralogical classification based on minerals present if you look at the classification schemes for volcanic rocks given in introductory geology textbooks.  For example, most such schemes show that a dacite is a rock that contains small amounts of quartz, somewhat larger amounts of sanidine or alkali feldspar, plagioclase, biotite, and hornblende,  In all the years I have been looking at igneous rocks (since about the mid-cretaceous) I have yet to see a dacite that contains alkali feldspar.

Does this mean that the intro geology textbooks lie?  Not really, these are the minerals that should crystallize from a dacite magma, but don't because the crystallization history is interrupted by rapid cooling on the surface.

Texture of the Rock

Rock texture depends to a large extent on cooling history of the magma.  Thus rocks with the same chemical composition and same minerals present could have widely different textures.  In fact we generally use textural criteria to subdivide igneous rocks in to plutonic (usually medium to coarse grained) and volcanic (usually fine grained, glassy, or porphyritic.) varieties.

Color of a rock depends on the minerals present and on their grain size.  Generally, rocks that contain lots of feldspar and quartz are light colored, and rocks that contain lots of pyroxenes, olivines, and amphiboles (ferromagnesium minerals) are dark colored.  But color can be misleading when applied to rocks of the same composition but different grain size.  For example a granite consists of lots of quartz and feldspar and is generally light colored.  But a rapidly cooled volcanic rock with the same composition as the granite could be entirely glassy and black colored (i.e. an obsidian).  Still we can divide rocks in general into felsic rocks (those with lots of feldspar and quartz) and mafic rocks (those with lots of ferromagnesium minerals).  But, this does not allow for a very detailed classification scheme.