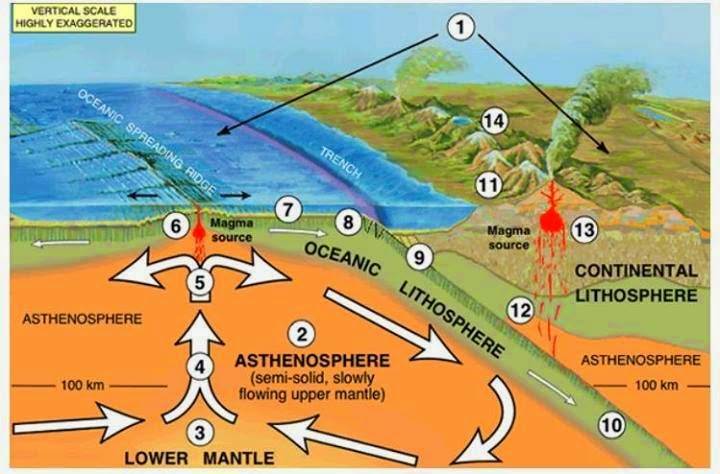 2.Beneath the lithospheric plates lies the ASTHENOSPHERE, a layer of the mantle composed of denser semi-solid rock. Because the plates are less dense than the asthenosphere beneath them, they are floating on top of the asthenosphere.

3.Deep within the asthenosphere the pressure and temperature are so high that the rock can soften and partly melt. The softened but dense rock can flow very slowly (think of Silly Putty) over geologic time. Where temperature instabilities exist near the core/mantle boundary, slowly moving convection currents may form within the semi-solid asthenosphere.

4.Once formed, convection currents bring hot material from deeper within the mantle up toward the surface.

5.As they rise and approach the surface, convection currents diverge at the base of the lithosphere. The diverging currents exert a weak tension or “pull” on the solid plate above it. Tension and high heat flow weakens the floating, solid plate, causing it to break apart. The two sides of the now-split plate then move away from each other, forming a DIVERGENT PLATE BOUNDARY.

6.The space between these diverging plates is filled with molten rocks (magma) from below. Contact with seawater cools the magma, which quickly solidifies, forming new oceanic lithosphere. This continuous process, operating over millions of years, builds a chain of submarine volcanoes and rift valleys called a MID-OCEAN RIDGE or an OCEANIC SPREADING RIDGE.

7.As new molten rock continues to be extruded at the mid-ocean ridge and added to the oceanic plate (6), the older (earlier formed) part of the plate moves away from the ridge where it was originally created.

8.As the oceanic plate moves farther and farther away from the active, hot spreading ridge, it gradually cools down. The colder the plate gets, the denser (“heavier”) it becomes. Eventually, the edge of the plate that is farthest from the spreading ridges cools so much that it becomes denser than the asthenosphere beneath it.

9.As you know, denser materials sink, and that’s exactly what happens to the oceanic plate—it starts to sink into the asthenosphere! Where one plate sinks beneath another a subduction zone forms.

10.The sinking lead edge of the oceanic plate actually “pulls” the rest of the plate behind it—evidence suggests this is the main driving force of subduction. Geologists are not sure how deep the oceanic plate sinks before it begins to melt and lose its identity as a rigid slab, but we do know that it remains solid far beyond depths of 100 km beneath the Earth’s surface.

11.Subduction zones are one type of CONVERGENT PLATE BOUNDARY, the type of plate boundary that forms where two plates are moving toward one another. Notice that although the cool oceanic plate is sinking, the cool but less dense continental plate floats like a cork on top of the denser asthenosphere.

12.When the subducting oceanic plate sinks deep below the Earth’s surface, the great temperature and pressure at depth cause the fluids to “sweat” from the sinking plate. The fluids sweated out percolate upward, helping to locally melt the overlying solid mantle above the subducting plate to form pockets of liquid rock (magma).

13.The newly generated molten mantle (magma) is less dense than the surrounding rock, so it rises toward the surface. Most of the magma cools and solidifies as large bodies of plutonic (intrusive) rocks far below the Earth’s surface. These large bodies, when later exposed by erosion, commonly form cores of many great mountain ranges that are created along the subduction zones where the plates converge.

14.Some of the molten rock may reach the Earth’s surface to erupt as the pent-up gas pressure in the magma is suddenly released, forming volcanic (extrusive) rocks. Over time, lava and ash erupted each time magma reaches the surface will accumulate—layer upon layer—to construct volcanic mountain ranges and plateaus, such as the Cascade Range and the Columbia River Plateau (Pacific Northwest, U.S.A.).