What Are the Most Important Types of Rock in the Crust? 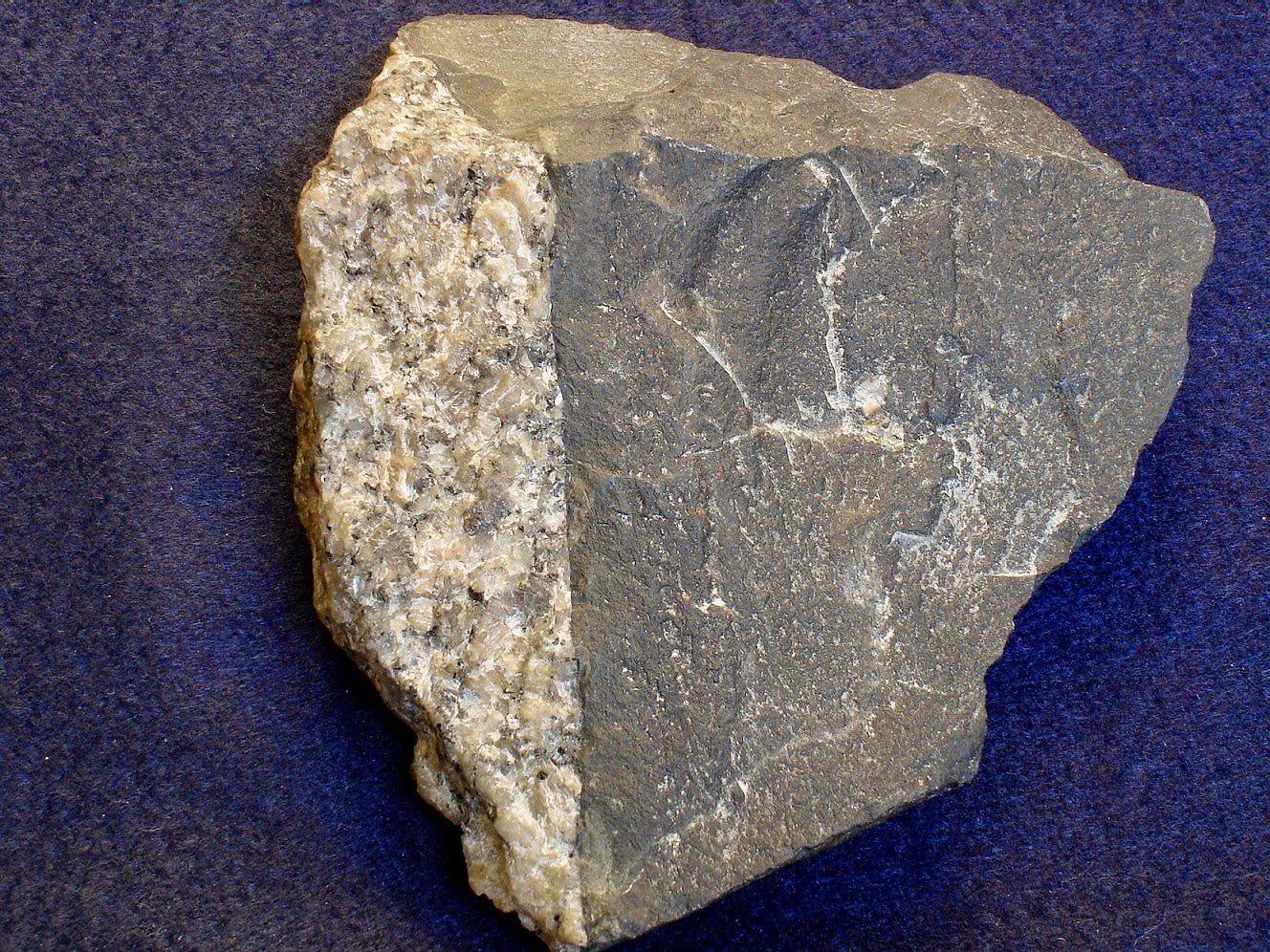 Basalt and granite actually have quite a bit in common. Both are igneous rocks, which means that they cooled from a magma (the earth gets very hot just below the surface, and there is lots of liquid rock available). Both are made up of minerals from the silicate group, so both have large amounts of silicon and oxygen. Both will hurt if you drop a big piece on your toe. But there are several important differences, too. These differences help define and explain how the earth works.

Granite is great stuff! Not only is it my personal favorite, it is without a doubt the most common rock type on the continental land masses. Yosemite Valley in the Sierra Nevada and Mt. Rushmore are two notable examples of granitic rocks. But granitic "basement rock" can be found just about everywhere east of the Rockies if you're willing to dig through the dirt and sedimentary rocks at the surface. Granite is intrusive, which means that the magma was trapped deep in the crust, and probably took a very long time to cool down enough to crystallize into solid rock. This allows the minerals which form plenty of time to grow, and results in a coarse-textured rock in which individual mineral grains are easily visible.

Granite is the ultimate silicate rock. As discussed elsewhere in greater detail, on average oxygen and silicon account for 75% of the earth's crust. The remaining 25% is split among several other elements, with aluminum and potassium contributing the most to the formation of the continental granitic rocks. Relatively small amounts of iron and magnesium occur, but since they have generally higher densities it's not surprising that there isn't very much in the granite. Due to the process of differentiation, most of the heavier elements are moving towards the core of the earth, allowing the silicon and oxygen to accumulate on the surface. And accumulate it has. Enough granitic "scum" has differentiated to the surface to cover 25% to 30% of the earth with the good stuff. We call this purified material felsic because of the relatively high percentage of silica and oxygen.

Basalt is extrusive. The magma from which it cools breaks through the crust of the earth and erupts on the surface. We call these types of events volcanic eruptions, and there are several main types. Thevolcanoes that make basalt are very common, and tend to form long and persistent zones of rifting in nearly all of the ocean basins. We now believe that these undersea volcanic areas represent huge spreading ridges where the earth's crust is separating. It's a lot like a cut on your arm, which will bleed until a scab forms. Basaltic magma is like the blood of the earth - it's what comes out when the earth's skin is cut the whole way through. As an eruption ends, the basalt "scab" heals the wound in the crust, and the earth adds some new seafloor crust. Because the magma comes out of the earth (and often into water) it cools very quickly, and the minerals have very little opportunity to grow. Basalt is commonly very fine grained, and it is nearly impossible to see individual minerals without magnification.

Basalt is considered a mafic silicate rock. Among other characteristics, mafic minerals and rocks are generally dark in color and high in specific gravity. This is in large part due to the amount of iron, magnesium, and several other relatively heavy elements which "contaminate" the silica and oxygen. But this heavy stuff really isn't happy near the surface, and will take any opportunity it can to head for deeper levels. The trick is to heat the basalt back up again so it can melt and give the iron another shot at the core. It wants to be there, and heat is the key which unlocks the door.

As it turns out, most of the ocean floor is basalt, and most of the continents are granite. Basaltic crust is dark and thin and heavy, while granite is light and accumulates into continent-sized rafts which bob about like corks in this "sea of basalt." When a continent runs into a piece of seafloor, it's much like a Mac truck running into a Volkswagon. Not very pretty, but at least there's a clear winner. And the seafloor basalt ends up in pretty much the same position as does the VW - under the truck (or continent, as the case may be). This may seem like a drag for the basalt, but remember that it isn't all that happy on the surface anyway, and this gives it the heat it needs to re-melt and try to complete the differentiation process which was so rudely interrupted at the spreading ridge. If successful and allowed to continue, what's left behind is a "purified" magma with most of the iron, magnesium, and other heavy elements removed. When it cools, guess what forms? And the continental land mass just got a wee bit larger.
Share to: