What Causes the Plates Tectonic to Move? 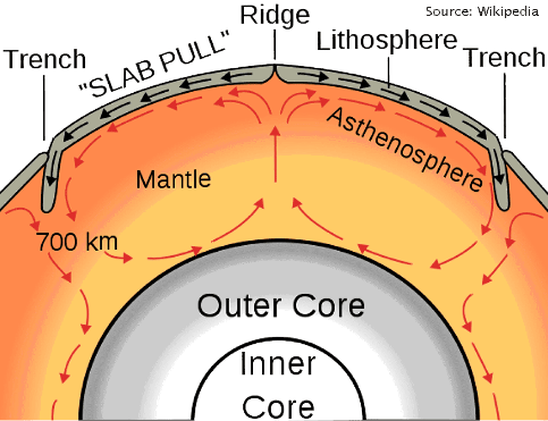 
With this much mass we can start to rule out some possibilities. The gravitational attraction of the moon just doesn't do the job. Nor does the attraction of the sun. Centrifugal force from the rotation of the earth probably can't get it done, and I really doubt that it's 3 big guys with a rope.

Probably the most logical place to look is inside the earth. We already know that it's pretty hot down there, and we also know that heat and density are related. The short version is that when something is heated up, there is a corresponding decrease in density, and the material rises. This is the reason hot air balloons work, and why the cold water is near the bottom of the lake and not on top.

This process also drives the major wind patterns. Rock is no different, and when heated it lowers in density and wants to go up. So far so good. The problem is that if it rises it's going to leave a void where it was, and we sure can't have that. Just like in the lake (or the atmosphere), water, air, or in this case rock, moves in from the side to fill the hole. But that just leaves another hole, so something has to move in to fill that one, and so on and so on until the stuff which moved in the first place does the filling and the circle is complete.

We call this circular pattern of density driven material a "convection cell," and as I said it's this convection which powers the major global wind patterns, affects the ocean currents... and may well drive the plates. Deep beneath the crust the rock is VERY hot, and while there is probably too much pressure for it to be a liquid, it's still somewhat mobile, and individual atoms and such can kinda/sorta ooze about, setting up convection cells which may carry the plates along where they rub up against the surface crust.

Most geologists accept convection currents as the most likely mechanism for plate motions. One of the biggest questions now relates to how deep within the mantle the convection cells extend. Pictured below is a diagram of "Deep Mantle Convection." Many geologists favor this concept. Many others favor shallow mantle convection. Others postulate multiple layers of convection. And I know 3 big boys in Grants Pass who are still looking for a rope.