How These Rocks Got Their Strange Hexagonal Shape 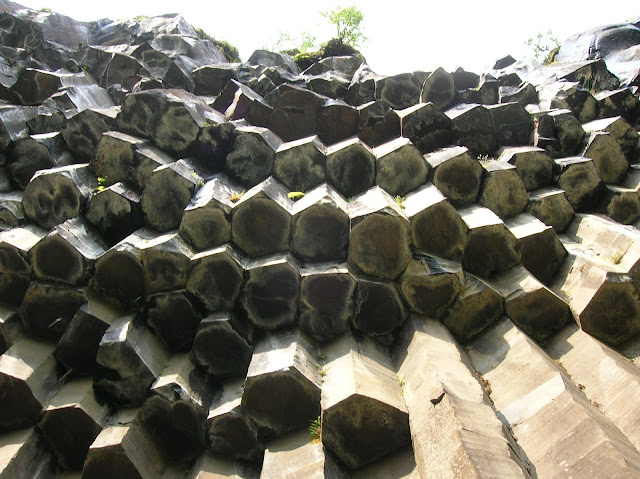 In many places worldwide, such as Devils Tower in Wyoming and the Giant’s Causeway in Northern Ireland, ancient lavas cooled into hexagonal blocks or columns.

Columnar basalt is unlike normal basaltic lava as it cools. Most commonly effusing from volcanic vents of various types, basalt tends to either form a’a, a rubbly kind of lava, or pahoehoe, a stringy, ropey form of lava. Either way, both types start as lava emerging from a vent and eventually cooling a little further down the volcanic slope.

The big geological mystery: Why that particular shape? Using the same sort of computer simulations engineers employ to analyze stresses in bridges and aircraft parts, researchers analyzed the stresses within a thick slab of lava as it solidified.

They found that as the material at the surface cooled, it shrank more quickly than the underlying lava, which was still warm. That shrinkage led to a random pattern of cracks that typically intersected at 90° angles.

But as the material cooled and shrank further and cracks grew downward into the solidifying slab, small cracks began to consolidate into large ones and the angles between them gradually shifted toward 120°—the angle at which the most energy is released, the researchers report online this week in Physical Review Letters.

Those 120° angles—the same angle between two adjacent sides of a hexagon—are generally maintained until the lava completely cools, which leads to the overall shape and pattern of blocks so commonly seen in nature, the researchers explain.

Read also: The Largest Insect Ever Existed Was a Giant "Dragonfly"
Scientists Solve the Mystery of How the Columns of Devils Tower Formed


The study was published in the journal  Physical Review Letters
Share to: