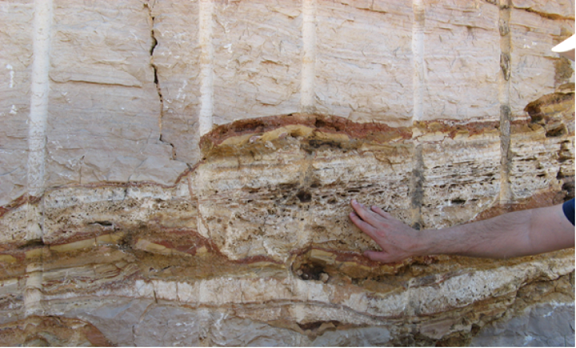 The sediment-based microbes form an important methane "sink," preventing much of the chemical from reaching the atmosphere and contributing to greenhouse gas accumulation. As a byproduct of this process, the microbes create a type of rock known as authigenic carbonate, which while interesting to scientists was not thought to be involved in the processing of methane.

That is no longer the case. A team of scientists has discovered that these authigenic carbonate rocks also contain vast amounts of active microbes that take up methane. The results of their study, which was funded by the National Science Foundation, were reported today in the journal Nature Communications.

"No one had really examined these rocks as living habitats before," noted Andrew Thurber, an Oregon State University marine ecologist and co-author on the paper. "It was just assumed that they were inactive. In previous studies, we had seen remnants of microbes in the rocks – DNA and lipids – but we thought they were relics of past activity. We didn't know they were active.

"This goes to show how the global methane process is still rather poorly understood," Thurber added.

Lead author Jeffrey Marlow of the California Institute of Technology and his colleagues studied samples from authigenic compounds off the coasts of the Pacific Northwest (Hydrate Ridge), northern California (Eel River Basin) and central America (the Costa Rica margin). The rocks range in size and distribution from small pebbles to carbonate "pavement" stretching dozens of square miles.

"Methane-derived carbonates represent a large volume within many seep systems and finding active methane-consuming archaea and bacteria in the interior of these carbonate rocks extends the known habitat for methane-consuming microorganisms beyond the relatively thin layer of sediment that may overlay a carbonate mound," said Marlow, a geobiology graduate student in the lab of Victoria Orphan of Caltech.

These assemblages are also found in the Gulf of Mexico as well as off Chile, New Zealand, Africa, Europe – "and pretty much every ocean basin in the world," noted Thurber, an assistant professor (senior research) in Oregon State's College of Earth, Ocean, and Atmospheric Sciences.

The study is important, scientists say, because the rock-based microbes potentially may consume a huge amount of methane. The microbes were less active than those found in the sediment, but were more abundant – and the areas they inhabit are extensive, making their importance potential enormous. Studies have found that approximately 3-6 percent of the methane in the atmosphere is from marine sources – and this number is so low due to microbes in the ocean sediments consuming some 60-90 percent of the methane that would otherwise escape.

Now those ratios will have to be re-examined to determine how much of the methane sink can be attributed to microbes in rocks versus those in sediments. The distinction is important, the researchers say, because it is an unrecognized sink for a potentially very important greenhouse gas.

"We found that these carbonate rocks located in areas of active methane seeps are themselves more active," Thurber said. "Rocks located in comparatively inactive regions had little microbial activity. However, they can quickly activate when methane becomes available.

"In some ways, these rocks are like armies waiting in the wings to be called upon when needed to absorb methane."

The ocean contains vast amounts of methane, which has long been a concern to scientists. Marine reservoirs of methane are estimated to total more than 455 gigatons and may be as much as 10,000 gigatons carbon in methane. A gigaton is approximate 1.1 billion tons.

By contrast, all of the planet's gas and oil deposits are thought to total about 200-300 gigatons of carbon.